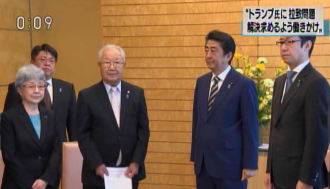 NHK reported at noon that PM Abe met with the families of the Japanese abductees at the Kantei today and told them that he will ask President Trump at the planned Japan-U.S. summit next month to call on North Korea to resolve the abduction issue when he meets with Kim Jong Un. The network showed Shigeo Iizuka, who heads a group representing abductees’ families, telling the premier: “This is a great opportunity. It would be troubling if we don’t take advantage of it. I hope all the summit meetings will lead to the return of the abductees.” In response, Abe reportedly said: “My mission will not end until the abductees and their families can embrace each other. I will reiterate Japan’s position especially on the abduction issue at the U.S.-Japan summit.”