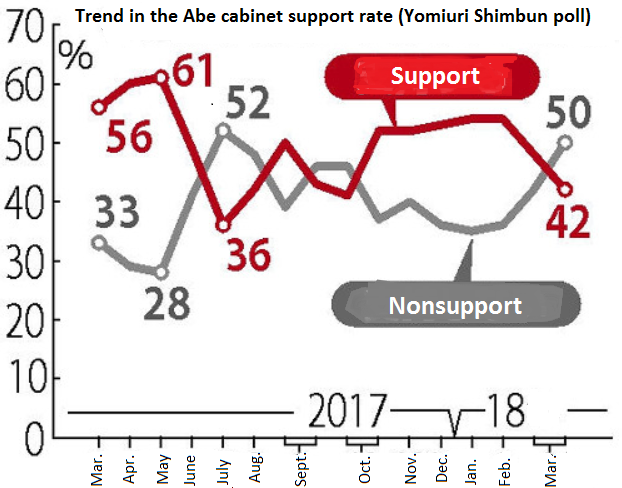 According to the Yomiuri Shimbun’s nationwide public opinion poll conducted on March 31–April 1, the cabinet support rate dropped for the second consecutive month to reach 42%, down 6 percentage points from the 48% marked in the previous survey (conducted on March 9–11). The nonsupport rate rose to 50% (previous survey: 42%), thus outstripping the approval rate. This is the first time for disapproval to exceed approval since right before the start of campaigning for the October 2017 Lower House poll (July–August 2017 poll).

The recent poll was conducted in light of the passage of the fiscal 2018 budget and the sworn Diet testimony given by former National Tax Agency Commissioner Nobuhisa Sagawa regarding the Finance Ministry’s tampering with official documents related to the sale of state-owned land to Moritomo Gakuen. The support rate plummeted 12 points from the rate (54%) marked in the Feb. 10–11 poll taken before the falsification of documents came to light. The cabinet support rate was higher than the 36% marked in the July 2017 poll when cabinet approval hit its lowest since the launch of the second Abe cabinet in December 2012, but 54% of cabinet nonsupporters in the recent poll said they do not back Abe because he is “untrustworthy.” This figure, alongside the August 2017 figure, is the highest in the history of the second Abe cabinet.

During his sworn Diet testimony, Sagawa, who was director-general of the Finance Ministry’s Financial Bureau at the time of the document tampering, said that no instructions were given by Prime Minister Shinzo Abe or those around him to tamper with the documents, but Sagawa did not clarify the background to the document falsification. Some 75% of all pollees said they are “not convinced” by the explanation. The majority of independents (86%) and of even Liberal Democratic Party supporters (56%) also said they are not convinced.

Some 51% said that Finance Minister Taro Aso “should resign” over the document falsification scandal, while 40% thought that is “not necessary.” Meanwhile, 64% said that Prime Minister Abe “bears major responsibility” in the Moritomo Gakuen scandal, and 60% said that First Lady Akie Abe should be summoned to the Diet to testify in relation to the scandal.

[Polling methodology: The nationwide survey was conducted on March 31–April 1 on a computer-aided random digit dialing (RDD) basis and targeted voters aged 18 or over with calls placed to landline and mobile phone numbers. Valid responses were received from a total of 1,111 persons, including 540 persons (out of the 921 households with one or more eligible voters) for landline numbers and 571 persons (out of the 1,160 persons who answered) for mobile numbers. The valid response rates were 59% for landline numbers and 49% for mobile numbers. ]