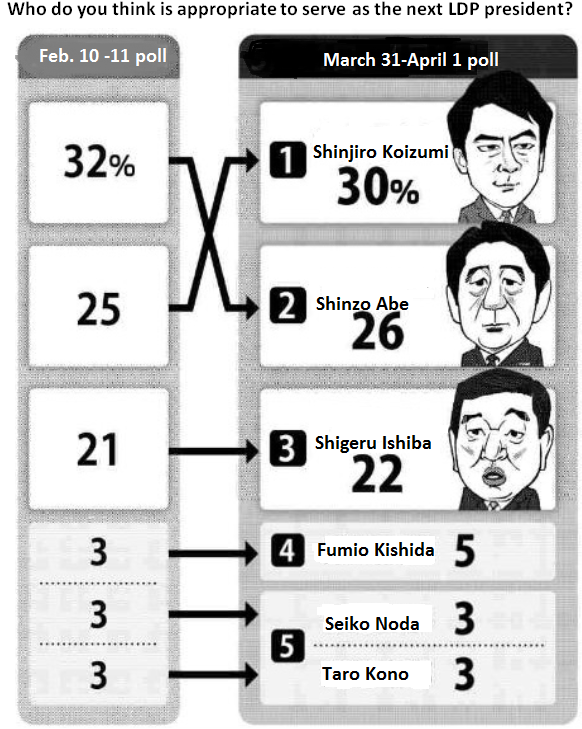 Asked who would be appropriate to serve as the next Liberal Democratic Party (LDP) president, 26% of respondents to Yomiuri Shimbun’s March 31–April 1 nationwide public opinion poll said Prime Minister Shinzo Abe (current LDP president), down 6 percentage points from the previous poll conducted in February. LDP Chief Deputy Secretary-General Shinjiro Koizumi outstripped Abe to come in first in the poll at 30%. Abe and Koizumi thus switched places in the ranking from the previous month. Although the prevailing view has been that the Prime Minister would have a third term as party president, with the impact of the document falsification scandal, it has now become impossible to tell how the fall LDP presidential election will turn out.

Koizumi has made several statements critical of the government in relation to the document falsification scandal, with some of his remarks attempting to counter Abe. “All power corrupts, so those who exercise it must have a humble attitude,” Koizumi has said. It seems that this stance has won a certain amount of favor among the people. Former LDP Secretary-General Shigeru Ishiba is also within striking distance of Abe, with his support at 22% remaining steady from the previous poll.

Among LDP supporters, however, Abe – with 53% of supporters backing him – has a clear lead over Koizumi (19%) and Ishiba (15%). There has been no change in Abe’s support. He draws his support from the Hosoda faction, the LDP’s largest grouping, from which he hails, as well as from the Aso and Nikai factions.  A top party official captured the views of many in the party, saying, “The prime minister’s footing is perfectly stable.”

With the unified local elections and the Upper House election coming up next year, it is, of course, impossible to tell when dissatisfaction with Abe may erupt from the local chapters. In the LDP leadership election in 2012, Abe lost to Ishiba in the vote count among rank-and-file party members. Given that Koizumi supported Ishiba in the 2012 race, “votes cast by the party’s rank-and-file members may go to Ishiba [depending on the moves by Koizumi],” a mid-ranking LDP member said. It looks like Prime Minister Abe will be forced to be cautious in his management of the administration for the time being. Regarding Abe’s constitutional amendment proposal to retain Paragraph 2 of Article 9, which states that Japan will never again maintain war potential, and add provisions that give grounds for the existence of the Self-Defense Forces, respondents were split, with 44% in favor and 41% opposed. There is a chance that the constitutional amendment will be a focal point in the party presidential race as Ishiba has been advocating that paragraph 2 be deleted.

[Polling methodology: The nationwide survey was conducted on March 31–April 1 on a computer-aided random digit dialing (RDD) basis and targeted voters aged 18 or over with calls placed to landline and mobile phone numbers. Valid responses were received from a total of 1,111 persons, including 540 persons (out of the 921 households with one or more eligible voters) for landline numbers and 571 persons (out of the 1,160 persons who answered) for mobile numbers. The valid response rates were 59% for landline numbers and 49% for mobile numbers.]