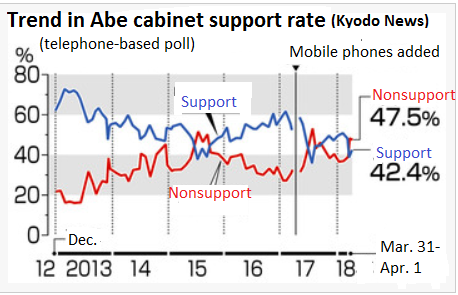 According to the Kyodo News telephone-based nationwide spot poll conducted on March 31–April 1, a total of 72.6% of respondents said they are “unconvinced” by the Diet testimony by former National Tax Agency Commissioner Nobuhisa Sagawa on the document-tampering scandal related to the sale of state-owned land to school operator Moritomo Gakuen. Only 19.5% said they are satisfied with the explanation. A plurality of 65.0% thought “Prime Minister Abe bears responsibility” over the document falsification issue, about equivalent to the finding in the previous poll conducted on March 17–18 (66.1%). Public support for Prime Minister Shinzo Abe’s cabinet edged up 3.7 percentage points to 42.4% but remained behind the disapproval rate, which stood at 47.5%, down 0.7 points from the previous poll.

Some 27.5% thought Abe “does not bear responsibility” in the document falsification scandal surrounding the land sale to Moritomo Gakuen. A plurality of 60.7% said First Lady Akie Abe should also be summoned to the Diet to offer an explanation on the issue (previous poll: 65.3%). Some 34.8% thought otherwise (29.0%). Those calling for Finance Minister Taro Aso’s resignation over the scandal dropped 4.7 percentage points to 47.3%, while 43.2% said there is no need for him to resign.

The administration has designated the “work-style” reform bill as the most important item in this Diet session. Some 69.9% of respondents said there is “no need to have the legislation passed during the current Diet session,” and only 18.5% said “it should be passed.”

The government is considering reforming the broadcast framework, including eliminating the clause in the Broadcast Act requiring broadcasters to ensure political fairness, to report from diverse perspectives, and to create programs that do not offend against public order and decency. Some 61.3% said they oppose the Abe administration’s plan, easily exceeding the 23.0% who said they support the government’s move.

On the question of who should be elected in the ruling Liberal Democratic Party presidential election in September (only one response permitted), former LDP Secretary-General Shigeru Ishiba took the top position at 24.1%. LDP Chief Deputy Secretary-General Shinjiro Koizumi followed at 23.5%, and Prime Minister Abe, at 23.1%, was ranked third, as he was in the previous poll.

The respondents remained divided over an LDP proposal to revise Article 9 of the Constitution by adding an explicit reference to the Self-Defense Forces, with 42.5% in favor of the idea while 45.0% opposed it.

[Polling methodology: The survey was conducted by telephone on a computer-aided random digit dialing (RDD) basis on March 31–April 1 targeting voters across the nation. However, the survey excluded landline numbers in some areas in Fukushima Prefecture. The survey covered 732 randomly selected households with eligible voters nationwide [by landline numbers], with responses collected from 509 people. A total of 1,131 people were accessed through their mobile phones, of which 511 responded.]