Young age groups are “moving away from Abe,” Yomiuri poll 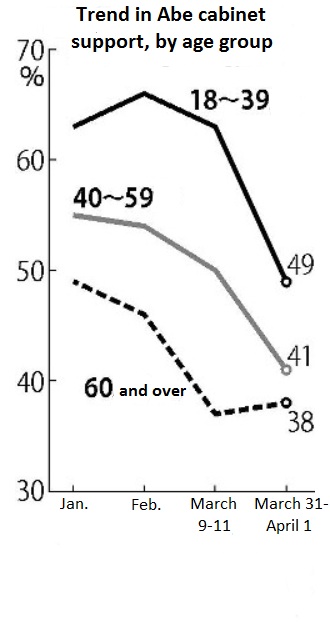 According to the Yomiuri Shimbun’s nationwide public opinion poll conducted on March 31–April 1, the Abe cabinet support rate dropped for the second consecutive month to reach 42%. The support rate kept to the 40% range and did not get near the 36% found in the July 2017 poll when backing marked its nadir since the launch of the second Abe cabinet. In the past, the young age groups have strongly supported Abe, but now even this segment is “moving away from Abe.”

Pollees say they don’t support cabinet because “PM is untrustworthy”

Compared with the Feb. 10–11 poll, which was taken before it was revealed that the Finance Ministry had tampered with official documents related to the sale of state-owned land to school operator Moritomo Gakuen, however, backing among those age 18 to 39 has decreased by 17 percentage points and backing among those age 40 to 59 has declined by 13 points, both outdistancing the drop among those age 60 and over (8 points). Further, cabinet support among those aged 18 to 29 went from about 70% in the February poll to around 50% in the recent one.

Another source of concern for the Abe cabinet is the fact that 54% of nonsupporters say they do not back the cabinet because “the prime minister is untrustworthy.” This is the highest percentage in the history of the second Abe cabinet.

In the July 24–26, 2015 poll taken immediately after the Lower House passed the security legislation, which was fiercely opposed by the opposition parties, nonsupport exceeded support 49% to 43%. Some 36% of nonsupporters said they did not back the cabinet because the “prime minister is untrustworthy” while 30% gave the reason of “nothing can be expected of the cabinet’s policy measures.”

In June last year when the support rate plummeted due to the Moritomo Gakuen and Kake Educational Institution scandals, however, cabinet nonsupporters saying “the prime minister is untrustworthy” skyrocketed to around 50%. The rate has remained in the 40% and 50% range since then as well, while other reasons for nonsupport are at slightly over 20% at most.

[Polling methodology: The nationwide survey was conducted on March 31–April 1 on a computer-aided random digit dialing (RDD) basis and targeted voters aged 18 or over with calls placed to landline and mobile phone numbers. Valid responses were received from a total of 1,111 persons, including 540 persons (out of the 921 households with one or more eligible voters) for landline numbers and 571 persons (out of the 1,160 persons who answered) for mobile numbers. The valid response rates were 59% for landline numbers and 49% for mobile numbers.]