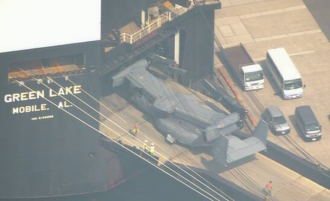 All networks reported at noon that five CV-22 Ospreys were unloaded from a ship at Yokohama’s North Dock this morning, saying that the CV-22s are expected to be moved to Yokota AB later this week. NHK said although the U.S. military was planning to deploy the aircraft at Yokota AB in October 2018 or later, it was disclosed on Tuesday that the deployment will take place ahead of schedule and that the five CV-22s will arrive in Yokota later this week. Fuji TV said a total of ten Ospreys will be deployed at Yokota over the next few years. The networks showed the five Ospreys being unloaded from a ship in Yokohama this morning. NHK said this is the first time for Ospreys to be deployed at a U.S. base located outside of Okinawa, and they are expected to fly to Yokota soon.

NHK quoted Chief Cabinet Secretary Suga as telling reporters this morning: “As the security environment surrounding Japan is becoming more severe, this will enhance the deterrence and response capability of the U.S.-Japan alliance. From the viewpoint of the U.S. commitment to the Asia-Pacific region and the establishment of an immediate response system, this will be conducive to Japan’s defense and regional stability.” According to the network, Suga also stressed that the government will take into consideration flight safety and the operation of Ospreys in Japan, and work closely with the U.S. to minimize the impact on local communities.