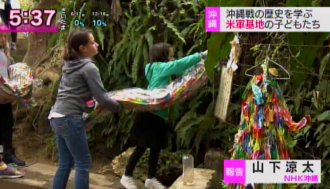 NHK reported this morning that pupils at Kinser Elementary School at USMC Camp Kinser in Okinawa are learning about the history of the Battle of Okinawa in 1945. The network showed a group of children of U.S. military personnel and civilians stationed in Okinawa presenting 4,000 origami cranes to a memorial at Maeda Kochi, or Hacksaw Ridge, the site of a fierce fighting, last week. The network said the students are learning about the history of Okinawa in their Japanese language classes. A Japanese teacher was shown giving a presentation to the children about Maeda Kochi. Another teacher asked the children how they would feel if they were dragged into a battle like the local residents in Okinawa were, and stressed the importance of understanding the feelings of the Okinawan people and the fact that many of them died in the fighting.

At Maeda Kochi, where a survivor talked to the children about the battle, the teacher asked them to take the story of Okinawa back to the U.S. and spread the word. One of the children was quoted as saying: “It was kind of shocking how many people survived and how many didn’t. That was kind of sad.” Another child was quoted as saying: “I felt that this was a great experience and I’ll remember it forever. It was just amazing to be able to learn the history and donate the cranes to the Hacksaw Ridge memorial.” The network said the wish for peace is being handed down to the next generation and across cultures.