Ospreys to be deployed at Yokota ahead of schedule 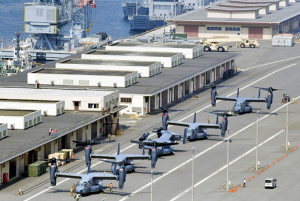 Asahi reported on the arrival of five CV-22 Ospreys in Yokohama on Wednesday, saying that although the Osprey deployment at Yokota AB was planned for October 2019 or later, it is now scheduled to take place this summer. The paper wrote that the Trump administration’s security strategy of attaching importance to Asia was behind the accelerated deployment of the aircraft, quoting an unnamed GOJ official as saying, “The United States moved up the deployment of Ospreys to Japan specifically in response to the situation on the Korean Peninsula and moves by China.”