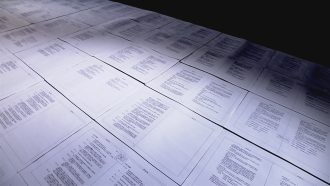 NHK’s “Close-up Gendai+” reported on the Ministry of Finance’s doctoring of documents concerning Moritomo Gakuen, saying that although former tax agency chief Sagawa was summoned to the Diet on March 27, the problem still has not been resolved. The program analyzed the 904 remarks made by Sagawa at the Diet last year . An NHK journalist said that the Moritomo documents were altered in more than 300 places, most of which were related to the negotiations on the sale of state-owned land. He said that Sagawa’s remarks were generally in line with the original documents, adding that the only sections where Sagawa’s remarks differed from the original documents were those connected to certain politicians. The journalist conjectured that the document tampering was aimed at fending off the opposition’s questions on the possibility of political involvement in the controversial land sale. The program also reported on an employee of the Kinki Finance Bureau who committed suicide in March, saying that although altering government documents that have already been cleared is unprecedented, it appears that the ministry was pushing an employee of a local bureau to make the changes.