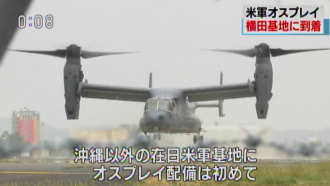 NHK reported at noon that five CV-22 Ospreys arrived at Yokota Air Base in Tokyo at about 11:30 a.m. on Thursday, saying that they are expected to be officially deployed at the base around this summer after participating in drills in the vicinity. The network said a total of ten Ospreys will be deployed and about 450 personnel will be transferred to Yokota over the course of the next few years, adding that this is the first time for the aircraft to be deployed at a U.S. base in Japan outside Okinawa. The network reported that the GSDF is also planning to introduce Ospreys, saying that the MOD is making arrangements to temporarily deploy five of them at Kisarazu Air Field in Chiba. The network said while there are voices of concern over safety, Ospreys operated by both the U.S. and Japan will be flying over the Tokyo metropolitan area in the future.