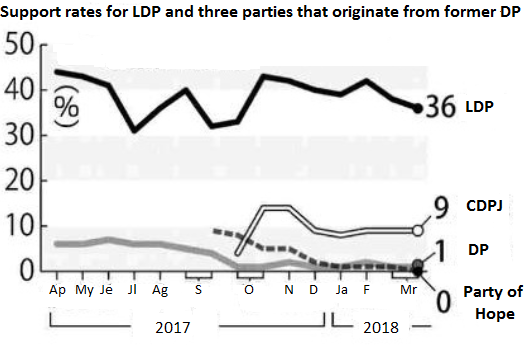 Even with the drop in the Abe cabinet support rate, the opposition parties continue to struggle with lackluster backing. This article looks into the reasons why this is the case by analyzing opinion poll findings.

In the Yomiuri Shimbun’s nationwide (telephone-based) public opinion poll conducted on March 31–April 1, the support rates for opposition parties were as follows: Constitutional Democratic Party of Japan (CDPJ), 9%; Japanese Communist Party (JCP), 2%; Democratic Party (DP), 1%. For the first time ever, the Party of Hope had a support rate of 0% (less than 0.5%).

Compared with the Feb. 10–11 poll taken before the falsification of documents related to the sale of state-owned land to Moritomo Gakuen had come to light, the cabinet support rate plunged 12 percentage points in the recent poll to hit 42% while the Liberal Democratic Party (LDP) support rate fell 6 points to 36%. Opposition party support did not turn up but simply leveled off. Those identifying as independents increased by 5 points to make up 41% of all pollees. Opposition party support was particularly low among the young generations. While backing for the CDPJ was 13% among those in their 50s and 60s and 11% among those age 70 or over, it was only 6% among those in their 40s or younger.

In the recent poll, 64% of all respondents – and the majority in every age group – said that Prime Minister Abe “bears major responsibility” in the Moritomo Gakuen scandal. Only 34%, however, said the Diet “should place priority” on the Moritomo Gakuen scandal in its deliberations. Among opposition party supporters, however, 58% said it should be central and some 62% of CDPJ supporters thought so as well. Only 41% of independents and less than half of all respondents in every age group thought so as well. It seems that many people think explication of the Moritomo scandal is important but the Diet should also discuss other issues, such as economic policies and security.

The public also takes a harsh view of opposition parties’ ability to govern the country. In their joint (mail-in) public opinion survey conducted in January and February this year, the Yomiuri Shimbun and the Institute for Research in Contemporary Political and Economic Affairs at Waseda University asked respondents to rate each political party’s ability to govern on a scale of 0 to 10, with 10 being high and 0 being low. The LDP was given the highest average score at 6.4 while the opposition parties originating from the former Democratic Party were given low scores: CDPJ, 4.2; Party of Hope, 3.1; DP, 2.9. Even independents, whose support of the Abe cabinet is low, awarded the LDP an average score of 5.4, higher than that they gave to the CDPJ (4.2). The same trend was found in the Yomiuri-Waseda University joint poll conducted in July–August 2017 when the cabinet support rate dropped substantially.

Masahisa Endo, a Waseda University associate professor specializing in voting behavior, says: “The public has a low opinion of the opposition parties’ ability to govern because the parties have been unable to shed the negative image of the Democratic Party of Japan administration. When the opposition parties fiercely pursue government and ruling party scandals, the cabinet support rate declines. If that is all the parties do, though, they have fewer opportunities to talk about their own policies and prove their ability to govern.”

The public also takes a harsh view of the attempts at merger made by the three parties that originated from the former DP. In the January–February joint poll, 65% of respondents said that “only those opposition parties whose policies align should join together,” exceeding the 32% who said “the parties should pool their strength even if their policies differ somewhat.” Many people have a negative opinion of moves to simply “gain numbers.”

Many people have hopes, however, for opposition parties’ role. Some 80% of respondents said “it is necessary to have an opposition party that can compete with the LDP.” The reason that there were, for a time, such high hopes for the Party of Hope when it was formed by Tokyo Governor Yuriko Koike at the time of last year’s Lower House election is because it appeared to offer an alternative to the LDP.

For the opposition parties to be able to meet the people’s expectations, they must not only monitor and grill the government, they need to show the ability to compete with the LDP in policy debate as well.