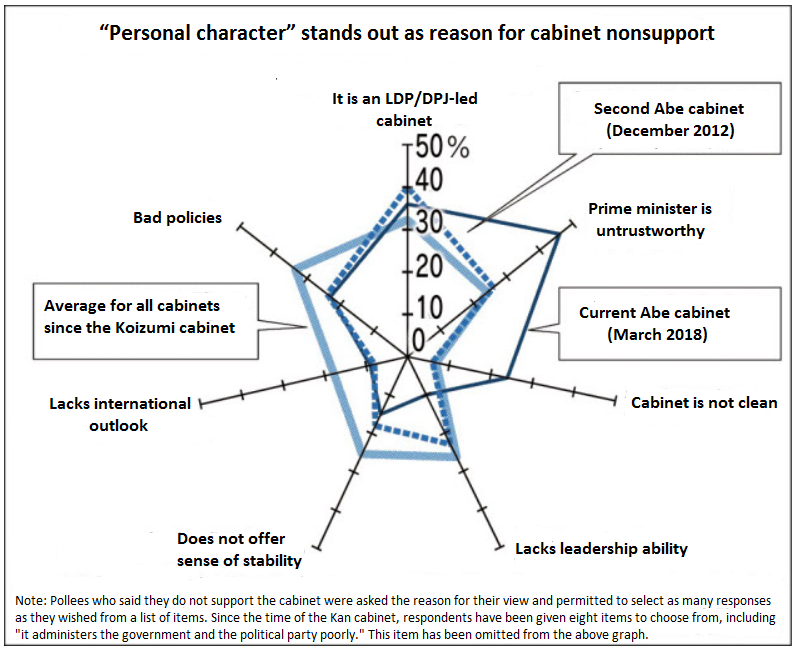 Every administration adopts various tactics to try to raise its cabinet support rate. If it creates a policy that is very popular with the people, the policy becomes a weapon for buoying up the administration. If a scandal breaks out, though, the cabinet’s image deteriorates, and the support rate also declines.

In the Nikkei public opinion poll conducted on March 23–25, the cabinet support rate plummeted from the 56% found in the poll taken in late February to 42% with the outbreak of the document falsification scandal surrounding [the heavily discounted state-owned land sale to] school operator Moritomo Gakuen.

This clearly shows that it is not Abe’s policies but Abe’s character that is the key factor behind cabinet nonsupport.

The first time that the cabinet support rate dropped dramatically after the second Abe cabinet took office in December 2012 was in 2015 when the security legislation was being debated. Looking at the reasons for nonapproval of the reshuffled third Abe cabinet that was launched after the legislation was enacted, the most frequently given response was “policies” at 44%. In this case, it is clear that the security policy aroused opposition and this pushed down cabinet support.

Since 2017 when the opposition parties started to grill the government over the Moritomo scandal, the nature of cabinet nonsupport has been different. Only 23% of those who did not support the third Abe cabinet (third reshuffling), which was launched in August 2017, gave the reason of “policies” while those citing “untrustworthy” was in the 40% range.

Let’s take a look at the findings of polls taken around the time of the launches of the cabinets that have come into being through new cabinet formation or reshuffling since 2001. Some 24% of cabinet nonsupporters gave the reason of “because the prime minister is untrustworthy” on average for the 25 cabinets. It is clear, therefore, that there has been a high level of distrust of the prime minister during the fourth Abe cabinet even compared with past cabinets. Moreover, the figure for “because the administration is not clean” substantially exceeds the average for the 25 cabinets (7%). The figure for “bad policies” is below the average figure for the 25 cabinets (34%).

The Koizumi cabinet was also long-serving, but the trends for nonsupport differ from the Abe cabinet’s. The third Koizumi cabinet was launched after the [2005] dissolution of the House of Representatives over privatization of the postal services. A high 42% of nonsupporters said that they did not back the cabinet “because it has bad policies,” while only 28% cited “because the prime minister is untrustworthy.” Those who opposed postal reform may have turned into cabinet nonsupporters over the postal privatization issue.

In the recent March poll, the most frequently given reason for supporting the Abe cabinet was “because it offers a sense of stability” at 45%, followed by “because it has an international outlook” at 34%. Both of these are all-time highs since the Koizumi cabinet.

Abe aims to make a comeback, and the task that lies before him is to shed the negative image that has developed due to the Moritomo scandal. At the LDP Party Convention held on March 25, Abe adopted a humble attitude and expressed his regret, saying, “I keenly feel my responsibility.” If the situation continues where he cannot convince the people and the public’s sense of distrust grows, it will be hard for Abe to regain a high support rate.