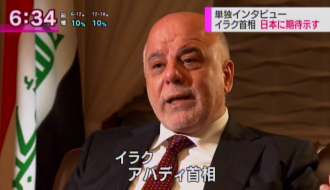 NHK reported this morning on its exclusive interview with visiting Iraqi Prime Minister Haider Al-Abadi, during which he expressed hope for Japan’s role in rebuilding the infrastructure of Iraq following its devastation by ISIL. The network said the Iraqi government claimed victory last year after regaining control of most of the areas that were dominated by ISIL. The Iraqi PM reportedly said that the infrastructure was destroyed by “Daesh” and that more than five million citizens were forced out of their own homes. He was also quoted as saying: “Restoring everything is a huge challenge for us. We need the support of the international community, including Japan.” On Prime Minister Abe’s announcement at an international conference held on Thursday that Japan is planning to take the lead in building a framework in which citizens can receive vocational training if they hand over their weapons, Al-Abadi reportedly welcomed the idea by saying that it will encourage the stabilization of Iraq.