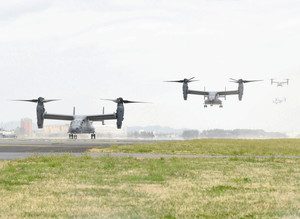 All national dailies except Nikkei highlighted the arrival of five CV-22 Ospreys at Yokota AB on Thursday, with Yomiuri speculating that the earlier-than-scheduled deployment is perhaps intended to apply stronger military pressure on North Korea ahead of the planned U.S.-DPRK summit. While quoting a USFJ press release as saying that the aircraft will “bring unparalleled special operations capabilities to the region,” the daily said additional CV-22s may be deployed at MCAS Iwakuni.

Some local officials and residents around Yokota base are reportedly concerned about the Osprey’s safety on account of accidents involving Futenma-based Ospreys in the past few years. Pointing out that the MV-22’s “Class-A” mishap rate is higher than the average accident rate for USMC aircraft, Yomiuri said the basic structure of the CV-22 is the same as the MV-22. The daily also claimed that in operating the CV-22s at Yokota, the U.S. military has promised that it will avoid flying them over densely populated areas as much as possible, as it did when deploying the MV-22s at MCAS Futenma.

Meanwhile, Tokyo Shimbun wrote that the GOJ withheld information on the Ospreys’ arrival for 18 days until April 3 even though it was told by the U.S. military on March 16 that the five tilt-rotor planes would arrive in Japan in early April. During a Diet committee session on Thursday, Foreign Minister Kono reportedly disclosed this, adding that the Japanese announcement on the arrival was made on April 3 because the U.S. military had requested Japan not make the plan public until coordination had been completed. Anti-base activists reportedly reacted strongly to what they called the Japanese government’s “concealment” of military information.