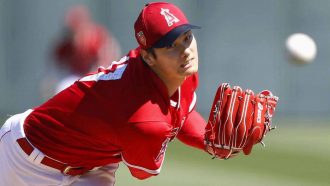 NHK’s “Close-up Gendai+” reported on Shohei Ohtani of the Los Angeles Angels, who made a phenomenal MLB debut by hitting a home run in two consecutive games. The program said he is the first MLB player in 98 years to be a starting member both as a pitcher and a batter during the first ten games of the season. The program said that although Ohtani performed poorly during spring training, he has managed to adapt to the MLB by changing his batting style. A commentator said that Ohtani should be able to win double-digit games as a pitcher and hit double-digit homers if he does not get injured this year, adding that he will become a baseball legend if he achieves this.