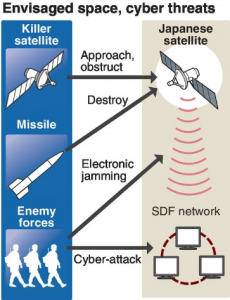 The National Center of Incident Readiness and Strategy for Cybersecurity on Tuesday warned all ministries and agencies that the official email addresses of about 2,000 central government employees had been leaked. This development underscored the government’s need to guard against cyber-attacks.

Each year, the Defense Ministry and Self-Defense Forces, which play a key role in national defense, face more than 1 million “attacks,” including those involving spam mail. Attacks utilizing targeted emails containing data-stealing viruses are particularly common, and there have been cases in which emails were sent from false accounts using the names of high-ranking government officials such as Shotaro Yachi, secretary general of the National Security Secretariat.

In the spring of last year, about 20 people in charge of countering cyber-attacks for the Joint Staff Office and Ground, Maritime and Air Self-Defense Forces worked on computers in the basement of the Defense Ministry in Ichigaya, Tokyo.

The cyberdefense staff handled such questions as “I opened a targeted email. What should I do?” and “Something happened with my computer. Where I should look and check the records?” This was their first training session, in which they competed to quickly and accurately respond to questions created by a private company, with the aim of enhancing the nation’s ability to handle targeted mails and other cyberincidents.

About 110 members of the Cyber Defense Group monitor information and communications networks, but their operations focus on defense. The group was set up in 2014.

A senior Defense Ministry official said, “The group’s training is mostly basic.” The Cyber Defense Group will see its headcount increase to about 150 by the end of this fiscal year, but they still face a personnel shortage.

According to the ministry, about 7,000 people work for North Korea’s cyber unit, while about 1,000 work for Russia’s. The Chinese unit, which handles space, cyberspace and electronic warfare, is said to have about 130,000 staff members.

In a cyber-attack, the attacker delivers new types of malware and other malicious materials, which forces the receiver to hastily analyze the problem and deploy countermeasures. This dynamic overwhelmingly favors the attacker.

North Korea is said to use cyber-attacks as a means of obtaining foreign currency. Cyber-attacks have also been used in live combat situations. When Russia annexed Crimea in southern Ukraine in 2014, it is believed to have utilized cyber and electronic warfare to disrupt Ukrainian operations.

The SDF possesses a degree of knowledge and ability in cyber-offensives. However, due to its defense-oriented posture, it has yet to obtain full offensive capabilities.

Whether Japan moves to acquire cyber-offensive capabilities will likely be a focus in the National Defense Program Guidelines to be devised by the end of this year and the Medium Term Defense Program. The guidelines represent a basic defense policy for a roughly 10-year period.

The Japanese government is also accelerating development of space-related measures along with its cyber-offensive measures.

In addition to information-gathering, satellites are used for such purposes as communications, the Global Positioning System and ballistic missile warning systems for unit operations.

A senior Defense Ministry official said, “If the nation falls into a situation in which a satellite cannot be used, it will fatally impair the operations of the SDF and U.S. military.”

China and Russia are also developing “killer satellites” that attack satellites, and antisatellite weapons that obstruct satellite functions using radio waves. In January 2007, China successfully conducted a test to destroy a satellite with a ballistic missile. However, the Japanese government does not possess the ability to attack satellites and instead prioritizes defensive measures.

Modern warfare is expected to include cyber-attacks on command centers, electronic jamming and the destruction of satellites, among other maneuvers.

On March 20, the ruling Liberal Democratic Party’s Research Commission on National Security drew up a “multidimensional defense concept” in the outline of its proposals for the new National Defense Program Guidelines. This concept also calls for the GSDF, MSDF and ASDF to work closely in the realms of space and cyberspace.

The nation needs to strengthen its ability to respond to a new battlefield.