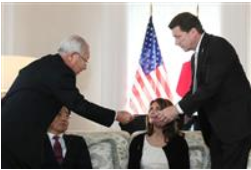 “Resolving the abduction issue is the top priority. We want President Trump to urge North Korea to resolve the issue”

On April 10, members of the Association of the Families of Victims Kidnapped by North Korea met U.S. Ambassador to Japan William Hagerty at the ambassador’s official residence in Tokyo. The members asked the ambassador to convey to President Donald Trump the message that they hope the president will strongly press Workers’ Party of Korea Chairman Kim Jong Un to return all abductees at the planned upcoming U.S.-North summit meeting. The ambassador, who showed understanding for the importance of resolving the abduction issue, emphasized, “President Trump is very interested in the issue.”

Ambassador Hagerty promised the families that he will directly convey their message to President Trump ahead of the scheduled Japan-U.S. summit meeting between the president and Prime Minister Shinzo Abe who will visit the U.S. this month. Regarding the reason that North Korea shifted its stance toward reconciliation, Ambassador Hagerty said, “The highest level of pressure has yielded results and Kim Jong Un initiated his move, asking for a meeting.” In this way, the ambassador emphasized the effect of economic sanctions by Japan and the U.S. and military pressure by the U.S.

Six families with 8 members including Sakie Yokota (82), mother of Megumi Yokota (now 53) who was abducted at age 13, and Minister of State for the Abduction Issue Katsunobu Kato participated in the hour-long meeting. Wearing in his lapel a “Blue Ribbon Badge” that symbolizes the families’ prayers for resolution of the abduction issue, Ambassador Hagerty welcomed the families. The ambassador told the press, “I know that this issue is high on the list of priorities for both President Trump and Prime Minister Abe.”

“The ambassador told us ‘the United States stands with you,’” said Teruaki Masumoto (62), younger brother of Rumiko (now 64) who was abducted at age 24. “We want to believe his words.”