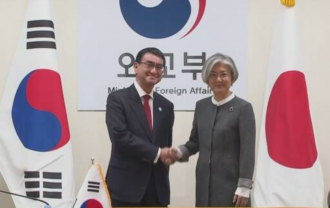 NHK reported at noon that Foreign Minister Kono met with his South Korean counterpart Kang this morning in Seoul. The network quoted Kang as saying at the beginning of the meeting: “While preparations are underway for inter-Korean and U.S.-DPRK summits, which will be major turning points in achieving North Korea’s denuclearization, we hope to work together toward the common goal of peacefully resolving the North Korean nuclear issue.” In response, Kono reportedly said: “I hope that Japan and South Korea will work together closely in order to realize North Korea’s denuclearization and bring peace, stability, and prosperity to Northeast Asia.” Jiji carried a similar story, saying that the two ministers agreed to maintain maximum pressure on the North to have it relinquish its nuclear and missile programs in a complete, verifiable, and irreversible manner. Jiji added that Kono is expected to meet with South Korean President Moon later today.