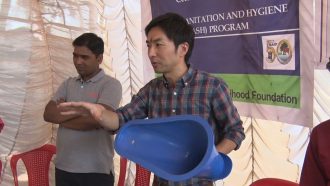 NHK’s “Close-up Gendai +” on Wednesday reported that public toilets at airports, stations, commercial facilities, and parks across Japan are undergoing major renovations ahead of the 2020 Tokyo Olympics. Toshiba Ward of Tokyo, where the percentage of young women in their 20s and 30s is expected to drop below 50% by 2040, is hoping to draw more young women to the area by renovating public toilets in parks. The program also showed different types of state-of-the-art toilets, including ones that can detect whether the person using them has certain diseases. The network also reported on a national project in China to renovate its public toilets and a Japanese businessman who is promoting the use of safe and low-cost toilets in India.