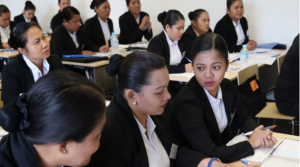 Filipino women are seen here at a training course in Tokyo to become housekeepers. (Photo by Koji Uema)

TOKYO — In a bid to increase the number of foreign workers to alleviate the country’s labor shortage, Japan will introduce a new residency status for foreign technical intern trainees as early as April 2019.

Foreign nationals who have finished a five-year technical intern program will be allowed to stay and work for an additional five years. They may also be able to change their visa status to work longer in the country and invite family members from their home countries.

Currently, foreign technical interns must leave Japan after finishing the five-year program. The new visa is aimed at extending their stay to help alleviate the nation’s labor shortage.

Japan’s policy, in principle, is to not grant unskilled workers permanent residency. Instead, the government hopes to expand the scope and length of the technical intern program, which allows foreign nationals to work in the country to acquire on-the-job skills.

The move, which broadens the scope of the program, signals a significant policy change by allowing interns to remain in the workforce for an additional five years.

A bill introducing the measure through an amendment to the Immigration Control Law will be submitted as early as April 2019.

The new residency status will help ease labor shortages in such areas as farming and nursing.

As of the end of October 2017, the number of interns in Japan totaled about 250,000. The government believes the new status will attract many interns and boost the number of foreign workers by at least several tens of thousands.

Industries suffering from a lack of labor, such as farming, nursing and construction, will be the main beneficiaries of the new measure.

The main purpose of the technical trainee program is for trainees to transfer skills acquired in Japan to their home country, meaning that participants must leave Japan after finishing the program.

But both trainees wanting to continue working in Japan and their employers have been calling for a change in the policy.

To keep the program running as intended, the new visa will only be granted to trainees who revisit Japan after having returned to their home countries for a specified period.

One requirement for foreigners who want to obtain permanent residency in Japan is to have lived continuously in the country for 10 years or more.

Because trainees applying for the new visa must have first returned to their home countries for a specified period, they can not qualify for permanent residency even if their total period of stay reaches 10 years.

To further increase the number of foreign workers, the government plans to offer the new residency status to those whose skills are comparable to interns who have completed the training.

The new measure is expected to also apply to foreigners who have already completed the five-year program and gone home.

Holders of the new visa will also be allowed to change their residency status to match a corresponding change in professional qualifications. Such persons will be able to invite family members to Japan and extend their period of stay.

Japan is expected to see a shortage of about 380,000 nursing staff in fiscal 2025, while the farm population has shrunk about 40% over the past decade.

As wages rise across Asia, it is becoming increasingly difficult to attract foreign workers to Japan, a situation that the new residency status is expected help alleviate.

Japan’s labor force totals about 66 million. The number of foreign workers hit an all-time high of 1.27 million as of last October, partly due to an increase in foreign technical interns.

The government intends to increase the number of foreign workers, who currently account for about 2% of the labor force.