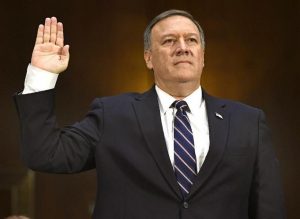 All national papers reported on the beginning of the Senate confirmation hearing for Secretary of State-Designate Pompeo on Thursday. Commenting on North Korea, Pompeo said: “I am not advocating for regime change.” In a written statement submitted to the Senate Foreign Relations Committee, the Secretary-Designate commented on the planned summit between President Trump and Kim Jong Un by saying: “I’ve read the CIA histories of previous negotiations with the North Koreans and I am confident that we will not repeat the mistakes of the past.” Pompeo also reportedly commented on the Iran nuclear accord and rising tension with Russia over Syria. The dailies also focused on his statement saying: “War is always the last resort. I would prefer achieving the President’s foreign policy goals with unrelenting diplomacy.”

While noting that the Secretary-Designate underscored the importance of finding a diplomatic solution to the DPRK nuclear standoff during Thursday’s hearing, Yomiuri opined in an analysis piece that the nominee focused on diplomacy to clear the confirmation hearing, which may become prolonged since he has consistently advocated taking a hard line against the Kim regime. The paper projected that his confirmation would increase pressure on Kim Jong Un ahead of the planned summit with President Trump.