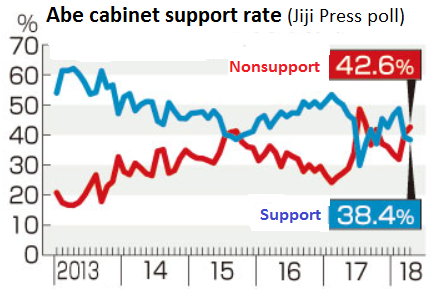 According to the April Jiji Press opinion poll conducted on April 6–9, the approval rate of Japanese Prime Minister Shinzo Abe’s cabinet fell 0.9 percentage points from the previous month to reach 38.4%, declining for the second consecutive month. The disapproval rate rose 2.2 points to 42.6%, exceeding the support rate for the second straight month. The cabinet approval rate continued falling amid a spate of scandals including the Ministry of Finance’s manipulation of documents related to a controversial state land sale to private school operator Moritomo Gakuen and the Defense Ministry’s suspected cover-up of Ground Self-Defense Force overseas mission reports.

The April poll preceded the revelation of a new document related to a cronyism scandal involving Kake Educational Institution, a school operator headed by an old friend of Abe. In the document, Tadao Yanase, then executive secretary to the prime minister, is quoted as saying in 2015 that the Kake group’s plan to open the country’s first new veterinary school in decades was “the prime minister’s matter.” The poll thus does not reflect the impact this may have had on public opinion.

Asked if First Lady Akie Abe should be summoned to the Diet to testify, some 54.2% said it is necessary while 32.0% said it is not and 13.8% said they “aren’t sure or don’t know.” The Prime Minister’s wife served for a time as an honorary principal of the elementary school that Moritomo Gakuen was planning to open.