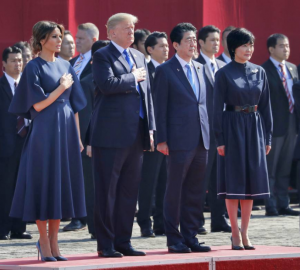 U.S. President Donald Trump and Prime Minister Shinzo Abe, accompanied by their wives, attend a welcome ceremony in Tokyo after the U.S. president came to Japan last November for his first visit after taking office. | KYODO

When U.S. President Donald Trump visited Tokyo last November, Trump and Prime Minister Shinzo Abe confirmed that Japan and the United States had reached a historic point in their relationship.

However, Abe’s trip to the U.S. to meet Trump on Tuesday and Wednesday takes place at a time when the once lauded rapport between the leaders has increasingly come into question.

That is because in recent weeks and days, Tokyo has repeatedly been blindsided by the mercurial American president, particularly regarding announcements that he plans to hold talks with North Korea’s supreme leader and new protectionist tariffs that could negatively affect Japanese companies.

In early March, Trump made the surprise announcement that he will meet with North Korean leader Kim Jong Un. And a month later, he announced the implementation of new aluminum and steel levies to protect domestic producers, only to exempt most major U.S. allies with the exception of Japan.

Experts said it is critical for Abe to work out what Trump’s real intentions are and make sure Japan’s interests are properly represented in the upcoming summit between Washington and Pyongyang.

Also, as his government deals with his scandals, Abe may see the international stage as a place where he can shine to mitigate the fallout from his political troubles. But experts warn he is unlikely to impress the public by just confirming the strong Japan-U.S. bond, saying he will need to produce tangible results, such as winning a promise to press the North hard on resolving the issue of Japanese nationals abducted in the 1970 and ’80s by the reclusive country.

“Prime Minister Abe’s top priority on this trip is to size up whether Trump’s recent policy shifts are just part of his performance to drum up domestic support ahead of the midterm elections, or if they reflect a much deeper effort to rethink the foundation of the Japan-U.S. alliance,” said Yuichi Hosoya, a professor of international politics at Keio University.

“What sets Trump apart from the past U.S. presidents is that important policy decisions are being made internally by a limited circle within his White House retinue, circumventing approval by the U.S. Department of State and the Pentagon.”

An inter-Korean summit is scheduled to take place on April 27, and Trump is expected to meet with Kim in late May or early June. But a summit between Tokyo and Pyongyang has not been announced. Therefore, Japan must heavily rely on South Korea and the U.S. in negotiating with Pyongyang.

Thus, Abe’s agenda boils down to repeating the need to bring back the abductees — his longtime goal — and to rid Pyongyang of both intercontinental ballistic missiles and shorter-range missiles, such as the Rodong, that pose a threat to Japan. Trade and tariffs will also be high on the agenda.

But Brad Glosserman, a visiting professor at Tama University’s Center for Rule Making Strategy, said there is a chance that the unpredictable U.S. president, who faces midterm elections in November, will place priority on his own political fortunes.

“The concern that I have is that the president will be so eager for a diplomatic win, that he will make a deal that frankly does not protect Japanese interests.”

Abe must remind Trump of his support and the strong relationship they have built to ensure the U.S. president will bring up issues of concern to Japan when he meets Kim, Glosserman said.

Matake Kamiya, a professor of international relations at the National Defense Academy, said upon meeting Trump, Abe, as an experienced world leader who has dealt firsthand with Pyongyang’s broken promises, should warn the president against the way Kim may try to finagle concessions from the U.S. during their summit. Abe was in the middle of his first stint as prime minister in October 2006 when the North, in a blatant violation of its pledge in the 2005 six-party denuclearization talks, conducted its first nuclear test.

“For example, if Kim, however improbably, offered to abandon everything it accomplished last year — such as the Hwasong 14 and 15 ICBMs — in his scheduled meeting with Trump, it may look like a huge step forward,” Kamiya said.

But this would not necessarily mean the North will actually give up its nuclear and missile programs, he said.

“What it means is that we will only find ourselves right back where we were” before Pyongyang launched into a series of unprecedented military provocations last year, with the threats from Rodong missiles still left unaddressed.

“What may look like a great compromise by the North may not be great at all. Abe will have to drill that into Trump,” Kamiya said.

Meanwhile, Bonnie Glaser, an Asia expert at the Center for Strategic and International Studies think tank in Washington, was more optimistic about the Abe-Trump relationship.

The imminent one-on-one talk with Trump also coincides with Abe’s growing political predicament at home, with his government — previously considered nearly invincible — hit by a seemingly unending cascade of scandals that include alleged cronyism involving himself, data cover-ups within the Defense Ministry and reports of sexual harassment by a top Finance Ministry bureaucrat.

“The situation is very bad. It’s not exactly that his Cabinet has to resign en masse immediately, but a yellow card — an extremely reddish one at that — is now being pointed at Abe’s chances of being re-elected” as president of the ruling Liberal Democratic Party, which will hold a leadership election in September, Norihiko Narita, a professor emeritus of political science at Surugadai University, said.

Abe’s government is in the throes of turmoil right now as it faces the reemergence of two separate favoritism scandals that had sent his popularity plummeting to dangerously low levels last summer. Back then, Abe managed to survive the crises by calling a snap election in October that saw him talk up his uncompromising stance against North Korea and his water-tight solidarity with Trump. He won by a landslide.

Now, with his power base once again on the verge of unraveling, the prime minister appears to be pinning his hopes on diplomacy, although analysts are largely skeptical he will be able to use the summit with Trump to regain the public’s trust.

“He will probably be able to win out of Trump the usual agreement that Japan and the U.S. are together, but it looks unlikely Trump will go as far as to promise to take a decisive step toward the abduction issue and get rid of Pyongyang’s short- and medium-range missiles, which are Japan’s main concern” as opposed to the ICBMs, Narita said.

The worn-out message that Japan and the U.S. are “100 percent” in lockstep with each other, he said, is less likely to resonate with the Japanese public now that North Korea’s saber-rattling has subsided considerably.

“While the trip will help push some of the scandals out of the headlines for a few days, I think on the whole that the summit won’t do much to help Abe domestically,” analyst Tobias Harris of Teneo Intelligence, the political risk arm of the strategic consultancy, said.