Knowledge and preparation key to M&A 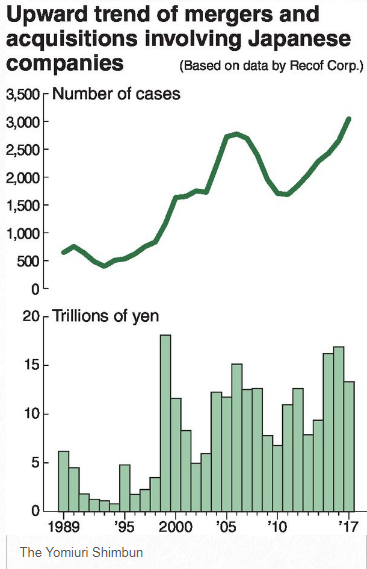 Kotaro Inoue, a professor at the Tokyo Institute of Technology, spoke with The Yomiuri Shimbun about the increasing mergers and acquisitions being made by Japanese companies. The following are excerpts from the interview.

Next chapter of globalization

The Yomiuri Shimbun: What is the current situation with mergers and acquisitions by Japanese companies?

Inoue: The number is increasing. Although they are necessary for the growth of many businesses, there are also many examples that have resulted in failure. Making them succeed requires such factors as strategic preparation in advance.

According to M&A consulting firm Recof Corp., there were a record high 3,050 mergers and acquisitions involving Japanese companies announced in 2017.

A: The largest reason for the increase is deregulation.

Until the 1980s, with many regulations still in place due to the government’s policy of protecting industries, Japanese M&A activity was sparse. With the “Financial Big Bang” — the drastic reform of the financial system in the late 1990s — major banks began to merge one after another. By around the mid-2000s, with intensifying competition due to easing of regulations, the integration of firms such as pharmaceutical makers began to increase rapidly.

The energy sector is becoming more deregulated, and similar trends have given rise to business alliances among electric and gas companies. M&A activity tends to concentrate in specific industries at specific times.

The aging of the population is causing domestic markets to mature, which also has an effect. A typical example is when Japan Tobacco Inc. acquired all non-United States tobacco businesses from U.S. company RJR Nabisco in 1999 as one way to accelerate its overseas business.

Another factor is no doubt the globalization of the economy which has led to an increasingly oligopolistic world. In the beer industry, for example, Belgium-based Anheuser-Busch InBev has increased its market share through repeated large-scale mergers and acquisitions. Major Japanese players, who had been left behind, have also strengthened their M&A activities.

M&A activity by Japanese companies will likely continue to increase. However, it cannot be said that such an approach is necessary for every company. On one hand, companies with experience in M&As will repeat the process, but on the other hand, companies that are not prepared to go through with mergers or acquisitions will have to pursue different management strategies. It is expected companies will be divided into two groups.

Q: What does it take to make a merger or acquisition succeed?

A: M&A efforts are not always successful. Analysis indicates that about half of acquirers improve their operating performance in the post-acquisition period.

The key is information. There are differences in the information a buyer and seller have about such matters as the business condition, corporate culture, business relationships and employment systems of an acquisition target. There is relatively little asymmetry of information between Japanese companies, but the differences can be significant when dealing with foreign companies. A shortage of information about the other party can cause imprecise calculations of corporate value. This can result in a “paying at a high price” situation, or “winner’s curse” situation, increasing the possibility of failure.

In order to avoid this, thorough preparation is required.

Potential acquisition targets should be identified in advance, and the kinds of synergistic effects that could be produced should be considered. Ideally, management should get in touch with the candidate firm’s top management ahead of time.

If thorough preparations have been made, a prospective buyer will not revert to hasty actions when an M&A project is brought in by such firms as investment banks. It will thus yield different results than if negotiations were rushed. “M&A masters” such as JT and SoftBank Group do not make haphazard acquisitions.

The management of the acquiring company must also ensure that its corporate strategy is well understood by the target, and must be strongly involved in the process. To begin with, employees at the target firm do not know anything about the new management. If the strategy is not made clear and strongly shared by the employees immediately after the acquisition, subsequent growth will be difficult.

Looking at past cases, full acquisitions have resulted in success more often than partial ones. Although investing more money carries a greater risk, fully capturing a company makes it much easier to achieve synergistic effects.

And again, management getting involved in the target company is key to success.

Q: What difficulties do Japanese companies face in mergers and acquisitions?

A: There are some issues that are specific to Japanese companies.

Compared to foreign companies, Japanese companies struggle with “selection and focus” at firms they acquire. There is no shortage of cases where a company fails to restructure unprofitable areas at a company it has acquired, instead only expanding its scale, leading to decreased overall profitability. This is likely due to an overemphasis on integration with the target company.

Switzerland-based global food giant Nestle conducted about 100 large-scale acquisitions over a period of approximately 10 years beginning in 2001, but it also sold almost the same number of businesses. If a company only buys, its assets expand and its funds dry up. But Nestle sold parts of its business while continuing its M&A activities. It reorganized and optimized the structure of its businesses and grew in the global market.

Q: Is Japan an attractive place for foreign companies to invest?

According to an analysis of about 5,000 recent large-scale M&As in major countries, 18.5 percent of acquisitions in the United States were conducted by foreign companies. The ratio in Britain was 32.1 percent, and the overall ratio across all 34 countries surveyed was 25.1 percent. but in Japan it was only 2.4 percent.

One reason for this is that companies in countries where restructuring and other employment system adjustments are relatively difficult are chosen as M&A targets less often. Negative feelings on the part of many Japanese people regarding the prospect of “being swallowed up by a foreign company” are apparently also a factor.

At first glance, this sentiment might seem positive, because it is protecting Japanese companies. But this is not the case. There might be companies that have good corporate resources but are unable to receive investment and are thus deprived of the opportunity to grow. Sharp Corp. speedily regained its momentum after Hon Hai Precision Industry Co. of Taiwan invested in it. I believe making Japan more competitive will require not only the purchase of foreign companies but also consideration of how to attract investment from overseas.

Kotaro Inoue: Inoue graduated from the University of Tokyo and obtained an MBA from the Massachusetts Institute of Technology. He has also worked in the M&A division of a consulting firm. He took up his current position in 2012.