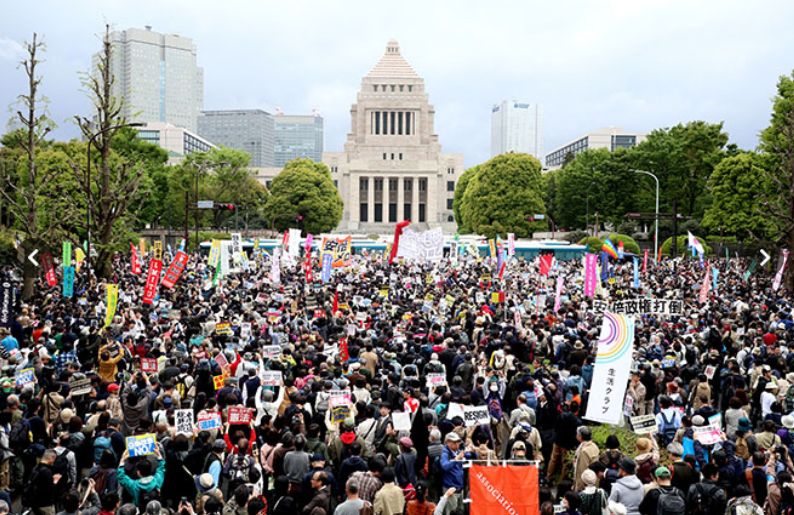 A huge crowd gathers in front of the National Diet Building on April 14 to protest the Abe administration’s handling of various scandals. (Ryo Ikeda)

Protesters turned out in full force across Japan on April 14 to make their voices heard over a “crisis in democracy,” decrying two scandals plaguing the administration of Prime Minister Shinzo Abe.

The economist Masaru Kaneko spoke before a crowd that organizers estimated at more than 30,000 in front of the National Diet Building in central Tokyo.

“We hold a sense of crisis that the falsifying and hiding of public documents means nothing less than the destruction of our nation and democracy,” said Kaneko, 65. “If these developments are allowed, any form of impropriety or corruption can be legitimized.”

Crowds gathered in Tokyo, Osaka, Nagoya and Fukuoka to protest the falsification of documents by Finance Ministry officials in connection to the dubious sale of state-owned land to school operator Moritomo Gakuen as well as the process behind the approval given to Kake Educational Institution to open a veterinary medicine faculty.

At the center of the two scandals lies questions about what influence Abe and his wife, Akie, had in the land deal and the approval of the veterinary medicine faculty. Kake Educational Institution is headed by a close friend of Abe.

A separate protest was organized in Tokyo on the evening of April 14 as several hundreds of demonstrators held up small bulbs in the shape of candles and signs that said, “Do not allow Abe-style politics.”

The “candle demonstration” was organized by the writer Hisae Sawachi and others to oppose a move to revise the war-renouncing Article 9 of the Constitution.

Sawachi spoke of the “indescribable anger” she felt at the attempt by an administration that allows the falsification of official documents that should be the bedrock of democracy to amend the nation’s pacifist Constitution.

She got the idea to use candles from similar protests that were held in South Korea against government corruption under former South Korean President Park Geun-hye.

Meanwhile, another group of younger members also held an event in Tokyo to support constitutional revision.

The Japan Constitution Project held its event in the fashionable Shibuya district of Tokyo. The group is trying to encourage more active discussions on revising the Constitution.