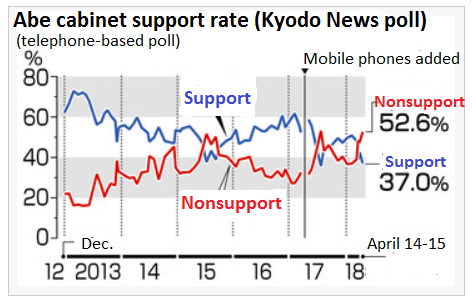 According to the Kyodo News nationwide telephone-based opinion poll conducted on April 14–15, a total of 79.4% of respondents are dissatisfied with Prime Minister Shinzo Abe’s explanation about a document which shows that his then executive secretary called the Kake Educational Institution veterinary school project the “prime minister’s matter.” Some 13.2% of pollees said they are satisfied with Abe’s explanation. The opposition parties are calling for former executive secretary Tadao Yanase to be summoned to the Diet as a sworn witness. Asked if this is necessary, 66.3% said yes, while 27.6% thought otherwise. Some 68.6% of respondents said that the process the government used to handle the Kake request to set up a veterinary school was inappropriate, easily exceeding the 21.1% who said there was no problem with the process.

Public support for Abe’s cabinet fell to 37.0%, down 5.4 percentage points from the previous survey conducted on March 31–April 1. It is the second lowest polling result since Abe commenced his second stint as prime minister in 2012, the lowest being the 35.8% found in the poll conducted in July 2017 after the Tokyo Metropolitan Assembly election. The disapproval rate for the cabinet stood at 52.6%, once again exceeding the support rate.

The Finance Ministry has acknowledged it requested school operator Moritomo Gakuen to coordinate its story regarding the removal of waste buried under state-owned land sold at a heavily discounted price to the institution. Asked if Finance Minister Taro Aso should resign to take responsibility, 48.9% said yes while 42.8% said no.

In light of the cover-up of daily activity logs of a past Ground Self-Defense Forces mission in Iraq, the poll asked if civilian control is operating appropriately. Some 78.4% of respondents said no while 13.1% said yes. A total of 67.7% said the Abe cabinet is responsible for the series of instances of inappropriate handling of official documents, while 27.1% thought it is not responsible. Some 32.3% said they are in favor of revising the constitution under Prime Minister Abe, while 57.1% said they are opposed.

[Polling methodology: The survey was conducted by telephone on a computer-aided random digit dialing (RDD) basis on April 14–15 targeting voters across the nation. However, the survey excluded landline numbers in some areas in Fukushima Prefecture. The survey covered 735 randomly selected households with eligible voters nationwide [by landline numbers], with responses collected from 512 people. A total of 1,140 people were accessed through their mobile phones, of which 513 responded.]