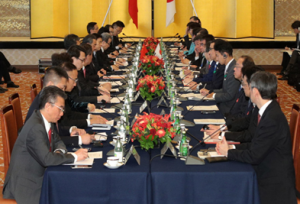 All papers took up Monday’s high-level economic dialogue held in Tokyo between Japan and China, during which the two sides confirmed the importance of strengthening free trade centering on the WTO mechanism amid rising concern about a global trade war as a result of the Trump administration’s imposition of tariffs. During the first such dialogue in eight years, they agreed to accelerate discussions for a trilateral FTA with Seoul and the Regional Comprehensive Economic Partnership initiative. The participants also agreed to provide government support for business tie-ups between the two nations’ commercial enterprises that are interested in China’s “One Belt, One Road” trade promotion initiative. The Japanese side reportedly asked the Chinese to take measures to prevent intellectual property infringement and address the oversupply of steel products. They agreed to hold economic dialogue regularly, with Foreign Minister Kono saying after the session that the next meeting will probably be held in Beijing next year.

The papers conjectured that the Chinese strongly called for the resumption of economic dialogue in a bid to play up stronger cooperation with Tokyo on the trade front with the goal of keeping the Trump administration’s protectionist trade policy in check. Nikkei wrote that the GOJ agreed to the resumption despite opposition from some officials in order to draw attention to the Abe administration’s accomplishments in improving ties with Beijing amid rising public disapproval of the prime minister.

As for the “One Belt, One Road” initiative, Yomiuri wrote that Japan is not necessarily embracing it fully and will promote its “open and free Indo-China” strategy in cooperation with the U.S. to rein in the growing economic influence of China in the region. The papers said the Chinese side did not give any concrete response to Japan’s request concerning the protection of intellectual property and the overproduction of metal products. Sankei wrote that the scope of trade coordination between Tokyo and Beijing is limited in the first place since Japan shares with the U.S. and Europe strong concerns about China’s improper trade practices.