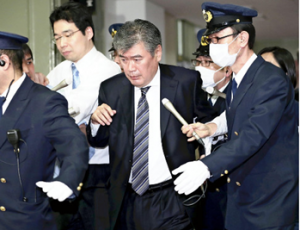 All papers reported extensively on a statement released by the Finance Ministry yesterday dismissing an allegation published in a weekly magazine that Vice Finance Minister Fukuda had sexually harassed female journalists. While admitting that he used offensive language at private events, the top ministry official reportedly told internal investigators that he has never used such language with female journalists. The statement reportedly asked the alleged victims to come forward and testify to prove the allegation, adding that the vice minister is prepared to file a libel suit. According to the articles, the publisher, Shinchosha, dismissed the ministry’s statement on the same day, emphasizing that it has full confidence in its reporting.

The dailies wrote that concern is mounting within the ruling coalition about whether the ministry is handling the latest scandal appropriately, especially at a time when public support for the Abe administration has been declining steadily due to the Moritomo Gakuen and Kake Gakuen scandals. Many ruling and opposition lawmakers are reportedly disturbed by the fact that the Finance Ministry asked female reporters to come forward based on the judgment that protecting the victims, including their privacy, is critical in dealing with sexual harassment. A consensus is reportedly emerging within the ruling coalition that Fukuda’s swift resignation is necessary to prevent the further weakening of Prime Minister Abe’s grip on power. Asahi conjectured that while the Kantei at one point had tried to relieve the vice minister of his duties, it decided not to do so at least for the time being out of deference to Finance Minister Aso, whose support seems to be essential in ensuring the administration’s political viability.