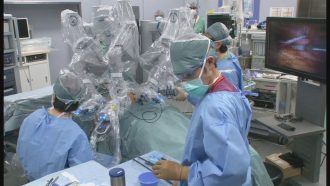 NHK’s “Close-up Gendai+” on Monday reported on nationwide efforts to reform work styles in Japan, focusing on medical institutions and schools where many people work extremely long hours. According to the program, about 40% of doctors, 30% of middle school teachers, and 60% of high school teachers work more than 80 hours of overtime each month. The program first looked at Niigata City Hospital, where a resident physician recently committed suicide due to extreme overwork. The hospital has decided not to accept patients with minor health problems because securing a sufficient number of doctors is difficult. The program also reported on a middle school in Osaka where, in addition to their regular work, teachers patrol the school district in the morning, supervise students during lunchtime to prevent bullying, oversee club activities after school, and respond to phone calls from parents and neighbors in the evening. The program said the city is planning such measures as hiring trainers from outside the school for certain classes and using automated answering machines during the evening.