Ishiba preferred over Abe for next LDP president, Asahi poll 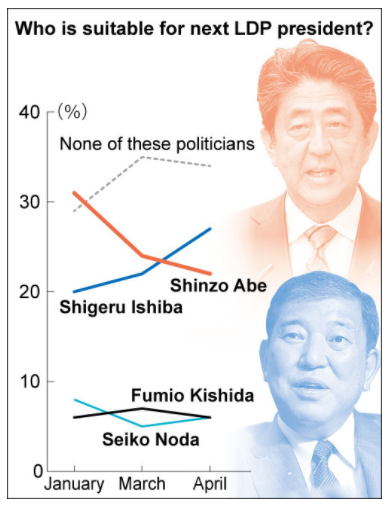 Shigeru Ishiba, former secretary-general of the ruling Liberal Democratic Party, for the first time emerged as a favorite among voters as the party’s next president over Prime Minister Shinzo Abe, according to a weekend poll conducted by The Asahi Shimbun.

Ishiba, often critical of the prime minister, was picked by 27 percent of respondents, followed by Abe with 22 percent.

The survey on April 14 and 15 listed four politicians who are likely to be the leading candidates in the LDP’s leadership election in September and asked who is suitable for the next party chief.

Abe, who has been beset with scandals that have hurt his support rate, is expected to seek a third term as head of the party.

Similar questions were included in Asahi Shimbun polls conducted in January and March.

Among LDP supporters, 46 percent picked Abe, the largest percentage among the four politicians. But the figure was down from 50 percent in March. Ishiba tallied 24 percent, up from 19 percent in March.

Among unaffiliated voters, 25 percent chose Ishiba, a rise from 19 percent in March, while support for Abe fell to 10 percent from 12 percent.

In the latest poll, valid responses were received from 945 voters contacted randomly through landline numbers and 966 through mobile phones.