Abe most popular as next LDP president among party supporters but backing is down 9 points, Kyodo News poll 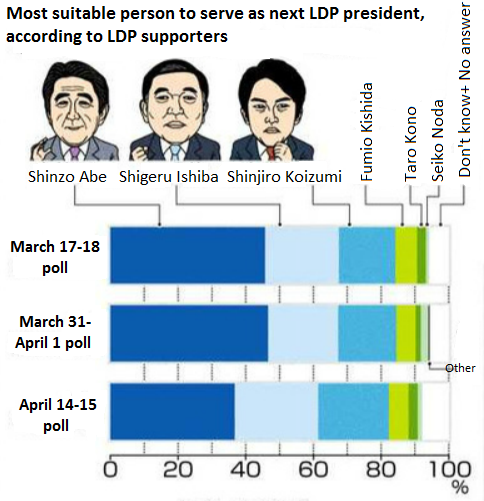 With the Liberal Democratic Party presidential election set for this September, the Kyodo News nationwide survey [conducted on April 14–15] asked pollees who they think is most appropriate to serve as the next LDP president. Shinzo Abe was the most frequently given response among LDP supporters at 36.7%, followed by former LDP Secretary-General Shigeru Ishiba at 24.7% and LDP Chief Deputy Secretary-General Shinjiro Koizumi at 20.9%. Abe’s support dropped by 9.9 percentage points from the previous survey conducted on March 31–April 1. Meanwhile, backing for Ishiba was up by 4.0 points and Koizumi’s was up 3.7 points.

Some 5.8% of LDP supporters thought LDP Policy Research Council Chairman Fumio Kishida should be the next president, while 2.7% thought Foreign Minister Taro Kono was most appropriate and 1.3% backed Minister for Internal Affairs and Communications Seiko Noda.

[Polling methodology: The survey was conducted by telephone on a computer-aided random digit dialing (RDD) basis on April 14–15 targeting voters across the nation. However, the survey excluded landline numbers in some areas in Fukushima Prefecture. The survey covered 735 randomly selected households with eligible voters nationwide [by landline numbers], with responses collected from 512 people. A total of 1,140 people were accessed through their mobile phones, of which 513 responded.]