Centuries worth of rare earth elements found in Japan’s EEZ 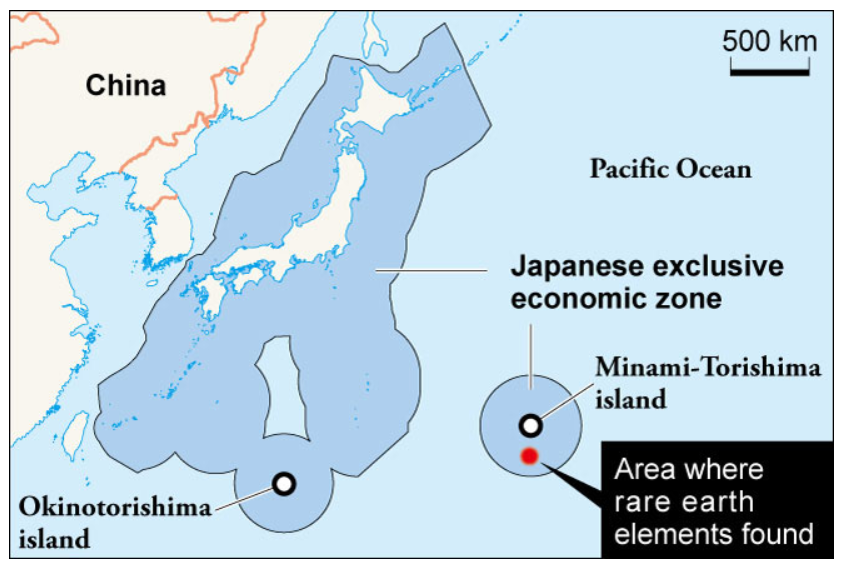 Massive deposits of rare earth minerals that could meet global demand for centuries have been found in Japan’s exclusive economic zone off the Ogasawara island chain 2,000 kilometers southwest of Tokyo, researchers said.

The deposits, estimated at 16 million tons, lie at a depth of 5,700 meters about 250 km south of Minami-Torishima island in the Pacific Ocean.

The discovery was announced by a team that involved Waseda University, the University of Tokyo and the Japan Agency for Marine-Earth Science and technology (JAMSTEC).

Researchers said it was reasonable to expect that technology could be developed in the near future to extract the deposits in viable quantities.

The team discovered traces of seabed deposits with a high concentration of rare earth elements in the area in 2013.

“The finding proves that there is an abundance of rare earth materials there,” said Yasuhiro Kato, a professor of earth resource studies at the University of Tokyo and a member of the team. “We also showed the potential for reducing mining costs, which will allow us to move forward toward rare earth resource development on a commercial basis.”

Team members collected samples by drilling at 25 locations in a zone measuring about 2,500 square kilometers using a deep-sea drilling vessel supplied by JAMSTEC.

Rare earth elements are indispensable in the manufacturing of parts for electric vehicles and other high-tech products. China has the world’s lion’s share of such resources.

The team found that rare earths are concentrated in biogenic calcium phosphate grains in seabed sludge.

It said it has developed a method to recover calcium phosphate from the mud by making the concentration of rare earth metals 2.6 times higher using centrifugal technology.

Tests done in a laboratory on land showed that the method could drastically slash mining costs by reducing the volume of mud raised from the seabed, team members said.

They said they intend to confirm the effects of the recovery technology and aim to put it into practical use in the days ahead.

The findings were published in the online edition of the British magazine Scientific Reports on April 10.