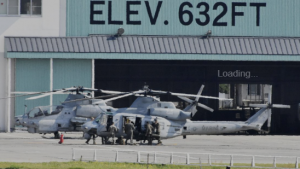 Asahi wrote that two U.S. military helicopters made precautionary landings at Kumamoto airport at around 1:17 p.m. on Wednesday. The landings caused no injuries and did not disrupt the airport’s operations. According to the Defense Ministry, the aircraft that landed were an UH-1 multipurpose helicopter and an AH-1 attack helicopter, both of which belong to MCAS Futenma. The U.S. Marines told the paper that that the two aircraft were heading together from Fukuoka to the MSDF Kanoya base in Kagoshima and landed when a warning light came on in the UH-1 helicopter. According to the Defense Ministry’s Kyushu bureau, an oil cooling system malfunction was detected in the UH-1 helicopter. The paper wrote that in response to multiple incidents involving Futenma-based U.S. military aircraft that have occurred in Okinawa since last October, the Okinawa Prefectural government has been calling on the U.S. military to suspend flights of all U.S. military aircraft in the prefecture to conduct emergency inspections. Yomiuri, Mainichi, Sankei ran similar reports.