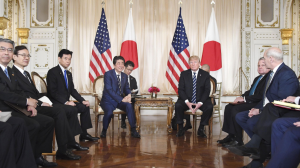 All national dailies reported extensively in their Wednesday evening and Thursday morning editions on the first day of the two-day summit between President Trump and Prime Minister Abe at Mar-a-Lago on Tuesday. The two leaders held talks for the first 55 minutes only with their interpreters present and held an expanded meeting for an hour and ten minutes afterward with a small number of senior government officials from both sides in attendance. All of the papers wrote that Prime Minister Abe asked President Trump to raise the issue of Japanese nationals abducted by North Korea at his summit with North Korean leader Kim Jong Un, and the President accepted Abe’s request by reportedly saying that he will do his best for Japan. The papers also wrote that the two leaders agreed to maintain maximum pressure on Pyongyang to seek the complete, verifiable, and irreversible denuclearization of North Korea.

Mainichi wrote that although the two leaders apparently held in-depth discussions on their policy coordination toward the DPRK, neither Japan nor the United States have disclosed the details of the bilateral talks. The paper added, however, that according to a GOJ source, the President called on the prime minister to correct the trade imbalance between the two nations. Yomiuri and Mainichi wrote that according to a Japanese source accompanying the prime minister, President Trump expressed his intent to call on North Korea to relinquish its short- and mid-range missiles that pose a threat to Japan. Nikkei speculated that Prime Minister Abe attaches importance to cooperation with President Trump out of concern that Japan could be left out amid the rapidly changing international situation surrounding the DPRK, including the planned inter-Korean and U.S.-DPRK summits. Sankei wrote that the President’s statement to the prime minister that he will raise the abduction issue at his planned talks with Kim Jong Un is a major achievement for Abe. Nikkei wrote that although Abe is hoping to resolve the abduction issue in order to regain public support ahead of the LDP presidential election in September, he is running out of time.

Mainichi wrote that the President reportedly stated in public remarks at the outset of his meeting with Abe that Japan is buying a tremendous amount of military equipment from the United States and the United States is buying a lot of cars and other products from Japan, but the two nations still have to talk further about trade and Prime Minister Abe understands that. The paper wrote that according to a Japanese briefing, the two leaders discussed economic issues at their talks.

Yomiuri and Nikkei wrote that the two leaders also discussed Syria and that the premier told the President that Japan supports the resolve of the United States, Britain, and France not to accept the proliferation and use of chemical weapons.