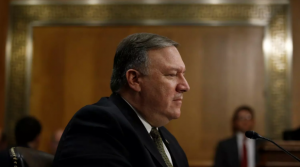 “He just left North Korea,” Trump said about Pompeo’s visit, when the president responded to questions from the press at his Mar-a-Lago estate on Wednesday. “He had a great meeting with Kim Jong Un. Got along with him really well, really great.”

Earlier in the day, Trump tweeted: “Meeting went very smoothly and a good relationship was formed. Details of Summit are being worked out now. Denuclearization will be a great thing for World, but also for North Korea!”

The CIA director is the highest-ranking American official to visit North Korea since then-Secretary of State Madeleine Albright in October 2000. Both countries appear serious about conducting a summit, despite initial skepticism among observers. The meeting is expected to take place by early June.

The Washington Post first reported Tuesday that Pompeo went to North Korea over Easter weekend, from the end of March to the beginning of April. Trump said Wednesday the trip occurred last week.

The timing of the visit suggests it was orchestrated mainly by the CIA, given that Pompeo’s nomination to lead the State Department came only March 13.

Details from the trip have not been disclosed. But as one of Trump’s closest allies, Pompeo likely acted as a proxy for the American president. Pompeo expressed confidence in the success of a summit during his Senate confirmation hearing afterward, which might signal that he obtained a promise from Kim that North Korea would work toward the removal of its nuclear weapons.

His visit also indicates that the Trump administration is not relying on regular diplomatic channels. Though the State Department has contact with North Korean representatives at the United Nations headquarters in New York, Trump has paid little attention to the department. Many of its key positions remain unfilled.

The CIA has picked up the slack on diplomatic efforts with North Korea. The agency established a Korea Mission Center last May to address Pyongyang’s nuclear and missile threat. Agents have been in frequent contact with North and South Korean intelligence agencies.

But negotiations that bypass traditional channels create risks as well. Successful diplomacy often depends on past rapport, but many experienced diplomats have quit the State Department since Trump took office. It remains unclear how successful a CIA-led approach would be.