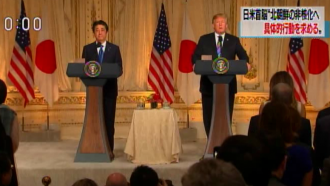 NHK reported at noon on a joint press conference held by President Trump and Prime Minister Abe held at the conclusion of their two-day summit at Mar-a-Lago, saying that the two leaders announced that they agreed to maintain maximum pressure on North Korea and urge it to take concrete actions toward denuclearization through the U.S.-DPRK summit. The network said the two leaders also announced that they agreed to create a new framework to discuss trade and investment between USTR Lighthizer and Minister in charge of Economic Revitalization Motegi.

According to the network, Abe said: “Thanks to the bold decision by President Trump to hold the first-ever U.S.-DPRK summit, we are facing a historic turning point….We should not reward North Korea by just agreeing to hold a dialogue. We once again agreed on the solid policy of maintaining maximum pressure and urging North Korea to take concrete actions toward denuclearization.” On the abduction issue, the premier said: “Japan and the United States are determined to work more closely and strengthen pressure on North Korea so that all of the abductees can return home immediately. “

The network said the President stressed that he will take a tough stance at the U.S.-DPRK summit to realize denuclearization, quoting him as saying: “If we don’t think it’s going to be successful, it won’t happen. If I think that it’s a meeting that is not going to be fruitful, we are not going to go.” The President also reportedly said even if the summit is held, he would walk out of it if he thinks it will not be fruitful.

Meanwhile, the network also quoted Abe as saying: “We will expand trade and investment between Japan and the United States to benefit both nations. Based on that foundation, I have agreed with President Trump to commence ‘consultations for a free, fair, and reciprocal trade deal’ for the economic development of a free and open Indo-Pacific region based on fair rules.” Abe also said: “I am aware that the United States is interested in pursuing bilateral deals, but Japan believes that the TPP is best for both nations. I hope to discuss the matter based on that position.”