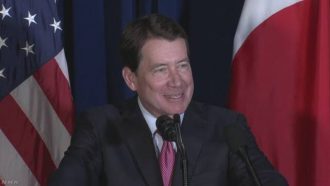 NHK reported online that Ambassador Hagerty, who attended the U.S.-Japan summit, talked to several media outlets at Mar-a-Lago on Wednesday and stressed the significance of President Trump’s promise to Prime Minister Abe that he will raise the abduction issue at the envisaged U.S.-DPRK summit. The network quoted the Ambassador as saying that the two leaders “had very deep and thoughtful discussions about topics including the DPRK and our strategy in negotiations that are upcoming between the President and Kim Jong Un.” On the abduction issue, the Ambassador reportedly said:  “President Trump met with their families in November of last year. Indeed, I met with their families just last week in my home in Tokyo. That’s been a major topic of conversation. I think there are very encouraging words coming there.”

Meanwhile, on the agreement to establish a new framework to discuss trade between the two nations, the Ambassador was quoted as saying: “It’s not a new framework; it’s an enhancement of the existing framework.” The network said the Ambassador expressed hope that discussions toward reducing the U.S. trade deficit will move forward. On whether Japan will be excluded from the tariff measures on steel and aluminum imports, the Ambassador reportedly said the conditions for Japan’s exclusion have not been discussed yet and expressed the view that discussions on it will be held between USTR Lighthizer and Economic Revitalization Minister Motegi.

Thursday evening’s Yomiuri reported on a separate press briefing on the summit given by Ambassador Hagerty, in which he reportedly disclosed that the two leaders discussed North Korea’s chemical and biological weapons. The Ambassador was quoted as saying: “President Trump’s intention is to see all of these weapons of mass destruction eliminated from the Korean Peninsula.”