Inmate escapes from prison with no walls 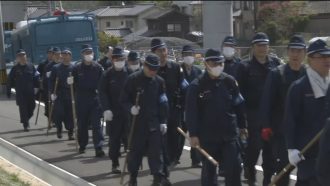 NHK’s “Close-up Gendai+” reported on a recent incident in which an inmate escaped from prison in Ehime Prefecture and is still at large, explaining that the prison was one of four in Japan that have no walls, no iron bars, and no locks on the cells. The program said the inmates are also allowed to work together with the general public, adding that such prisons were built for the purpose of helping inmates readjust to society more easily. However, a total of 20 inmates have escaped from the prison over the past 57 years.