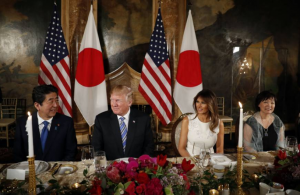 All national dailies gave extensive top play to the two-day summit between President Trump and Prime Minister Abe at Mar-a-Lago, focusing on their second day of talks and the post-summit joint press conference.

Asahi wrote that although the two leaders agreed to establish a new framework to discuss trade led by USTR Lighthizer and Economic Revitalization Minister Motegi under the U.S.-Japan Economic Dialogue, Japan did not achieve its reported goals of exemption from the steel tariff and the U.S.’s return to the TPP. The paper highlighted the President’s remarks at the joint press conference saying: “I don’t want to go back into TPP….  I like bilateral better. I think it’s better for our country, I think it’s better for our workers and I much would prefer a bilateral deal. A deal directly with Japan.” Asahi also quoted Ambassador Hagerty as telling reporters on Wednesday: “Japan has entered into trade agreements already with the TPP-11 and with the European Union. We do not want to be in a situation where U.S. companies are placed at a disadvantage.” The paper wrote that although the prime minister was successful in winning the President’s agreement to raise the abduction issue at his planned talks with North Korean leader Kim Jong Un, he was unable to narrow their differences over trade.

Yomiuri opined that Prime Minister Abe was able to divert market-opening pressure from the United States for now through agreement on the establishment of a new framework within the Economic Dialogue to discuss trade, but it was made clear that there are major differences between the two nations because Washington wants to open the Japanese market through bilateral negotiations and Japan is hoping that the United States will return to the TPP. Meanwhile, the paper wrote that Deputy Chief Cabinet Secretary Nishimura told reporters after the summit that the two leaders did not discuss currency issues.

Nikkei, noting that Prime Minister Abe spent more than ten hours with President Trump in total on April 17 and 18, claimed that although he was able to demonstrate his close relationship with the President, there are clear differences between the two leaders on trade. Nikkei added that President Trump stated at a joint press conference: “We’re exploring ways to expedite the sale of American military equipment to Japan.” The paper conjectured that this remark indicated the President’s aim to urge Japan to expand its procurement of defense equipment from the United States by shortening delivery time.

Mainichi, running the front page headline “U.S. Prefers Bilateral Trade Deal with Japan,” wrote that the President, while agreeing to cooperate closely on the denuclearization of North Korea, expressed strong dissatisfaction with the U.S. trade deficit with Japan. The paper predicted that Japan may face tough negotiations in the future, including calls for bilateral negotiations on farm products and autos.

Sankei wrote that through the new trade negotiation framework the United States and Japan will hold specific discussions on bilateral trade that will benefit both nations by overcoming their differences regarding the TPP and a possible bilateral trade agreement. The paper conjectured that although the two nations avoided a serious confrontation over trade by establishing the new framework, they are merely deferring action and the trade dispute between the two nations may intensify if Washington and Tokyo fail to produce tangible results.

Concerning North Korea, Asahi wrote that President Trump and Prime Minister Abe demonstrated their strong cooperation, saying that in addition to the abduction issue, one of Japan’s major concerns was whether it would be able to win a U.S. commitment to demand that the DPRK abolish its short- and mid-range missiles capable of reaching Japan.