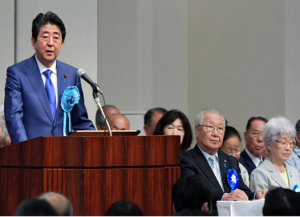 All national dailies wrote today that Prime Minister Abe met yesterday with the family members of Japanese nationals abducted by North Korea to brief them on his latest summit with President Trump. The premier reportedly disclosed that the U.S. leader told him that he will do as much as possible to bring the Japanese abductees home. Abe also stated to the families: “We have no intent to ease sanctions [on North Korea] at this stage…. It is necessary to watch carefully to see whether North Korea will move toward getting rid of its weapons of mass destruction and ballistic missiles.”

In a related story, Asahi said abductee family members Takuya Yokota and Koichiro Izuka will visit Washington later this month with the goal of asking President Trump via USG officials to address the fate of their loved ones during his planned summit with Kim Jong Un. Yokota reportedly stated that he was “very encouraged” by the U.S. leader’s pledge to do his best to bring the Japanese abductees home.