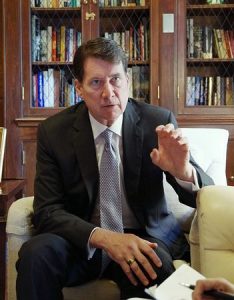 Jiji’s website published an article on an interview with Ambassador Hagerty, who projected that when meeting with DPRK leader Kim Jong Un, President Trump will demand the early abolishment of its biological and chemical weapons as well as its nuclear arsenal. The Ambassador, commenting on the Florida summit, reportedly said the two leaders held “in-depth discussions” on all types of weapons of mass destruction possessed by North Korea. Ambassador Hagerty reportedly said the President has made clear that he will only participate in a U.S.-DPRK summit as long as it is fruitful, and that any agreement will include verification protocols. As for President Trump’s commitment to addressing the abduction issue in his sit-down with Kim Jong Un, the Ambassador disclosed that the President understands that this is a very serious issue for the families of the victims and the Japanese people. Speaking on the Kim regime’s announcement on the suspension of nuclear development, the Ambassador said: “It evidences that the international community’s maximum pressure campaign is bearing fruit. It is a very good thing for the North Korean people.”