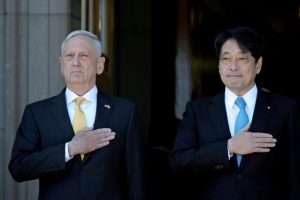 All weekend papers reported from Washington on a meeting at the Pentagon on Friday between Secretary Mattis and Defense Minister Onodera, during which they agreed that North Korea should get rid of all of its ballistic missile programs, including short- and medium range missiles, as well as weapons of mass destruction. The two defense chiefs agreed to continue applying pressure on North Korea. Onodera also held talks with National Security Advisor Bolton, during which they discussed China’s maritime advancement in the South and East China Seas.