The Justice Ministry plans to expand the use of a facial recognition system at Haneda Airport to four other airports.

The system, which currently screens the faces of Japanese nationals returning home, will also be used for foreigners leaving Japan from fiscal 2019. It allows a single immigration officer to oversee multiple stations, freeing other officers to screen foreigners for entry and deal with suspicious persons.

The ministry hopes through the system to strengthen antiterrorism measures for the 2020 Tokyo Olympics and Paralympics.

Under the system, the photograph stored on a passport’s IC chip and photos taken at immigration counters are checked by computers to confirm whether both photos are of the same person.

Travelers place their passports over an electronic reader and position their faces close to an attached camera. If a match is determined, entry or exit is approved.

Screenings take about 15 seconds, and the system can adapt to age-related changes. “There would be almost no cases of misidentification,” a senior ministry official said.

The government began using the system in October last year for reentry screenings of Japanese citizens at Haneda. Three machines handle about 20 percent of all returnees, or about 2,600 people, every day at the airport.

This fiscal year, the government plans to start installing a total of 134 more machines at Haneda, Narita, Kansai, Chubu and Fukuoka airports. From next fiscal year, the machines would also be used to screen foreigners leaving the country at the five airports.

In conventional entry and exit screenings, an immigration officer usually confirms a person’s identity through an interview-style interaction.

With facial recognition, one immigration officer could oversee the system on several machines, shortening the time required for screenings. It is estimated that by operating 137 machines, dozens of officials will be able to undertake different duties. 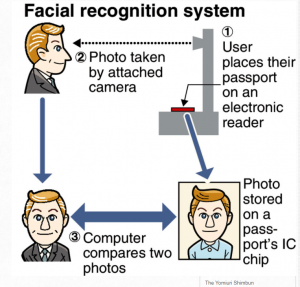