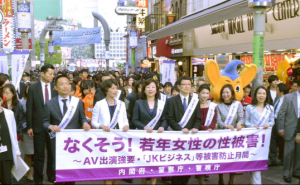 Female college students joined senior government officials and police officers in marching along a bustling Tokyo street on Friday to call for an end to sex crimes targeting young women.

About 140 people, including members of a civic group helping victimized women, walked along Shibuya Center Street, a popular hangout for young people, as April is designated by the government as the month for campaigning against forced performance in adult videos and crimes linked to the so-called JK business. The business employs girls wearing high school uniforms.

Seiko Noda, the minister for women’s empowerment, said during a rally that the eradication of women’s sexual exploitation is a task for the whole of society. “I’m calling (for the cooperation) of the nation,” she said.

According to Lighthouse, a Tokyo-based group that helps human trafficking victims, it was contacted by 100 women in 2016 and 99 women in 2017 who were seeking consultations after being forced to appear in adult videos. They were typically deceived as they were recruited as models.

Meanwhile, statistics compiled by the National Police Agency show there were 131 JK business shops in Japan as of the end of last year, with Tokyo being the location for the largest number of 83.

The services include allowing customers to take walks with the girls, take naps with them or receiving massages from them. The businesses often offer hidden, optional sexual services and an increasing number of girls have been forced to provide them, police said.