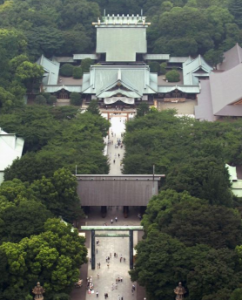 Japanese Prime Minister Shinzo Abe sent a ritual offering to Tokyo’s war-linked Yasukuni Shrine on Saturday, the first day of its annual spring festival, according to shrine officials, sparking a protest by the South Korean government that views Yasukuni as a symbol of Japan’s past militarism.

Abe is expected to forgo a visit to the Shinto shrine during the three-day festival after making the “masakaki” tree offering in the name of the prime minister, in an apparent appeal to his conservative supporters.

The South Korean Foreign Ministry issued a statement expressing “deep concern and regret” over Abe’s offering and a visit Friday by a cross-party group of lawmakers to the shrine, calling on Tokyo “to reflect on and atone for its past deeds and step up efforts to gain trust from neighboring countries and the international community.”

The shrine has been a source of friction with Asian countries that suffered from Japan’s militarism during World War II as it honors Japanese leaders convicted as war criminals along with millions of war dead.

The shrine stages spring and autumn festivals in April and October, regarded as the most important events in its calendar.