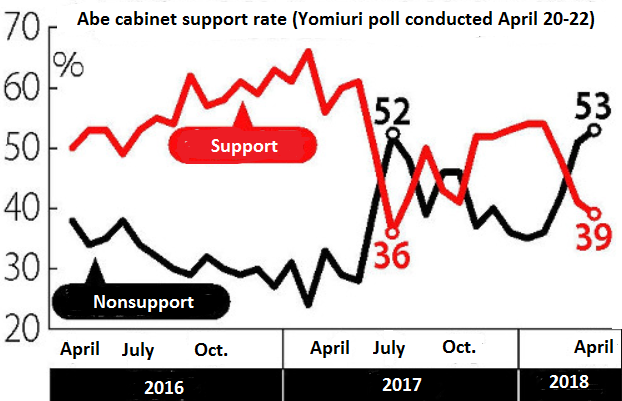 According to the Yomiuri Shimbun’s nationwide public opinion poll conducted on April 20–22, the cabinet support rate dropped to 39%, down 3 percentage points from the 42% marked in the previous survey (conducted on March 31–April 1). Cabinet approval thus decreased for the third consecutive month since the March 9–11 poll, falling a total of 15 points. This is the second lowest support rate since the launch of the second Abe cabinet.

The nonsupport rate rose to 53%, exceeding the 52% found in July 2017, which was the highest ever for the second Abe cabinet. Some 62% said they do not support the cabinet because “the prime minister is untrustworthy” (previous survey: 54%), another record high.

Regarding the Kake Educational Institution’s proposal to establish a new veterinary school, a document has been found that states that Tadao Yanase, then executive secretary to Abe, met with Ehime Prefectural officials and others and said the Kake Educational Institution veterinary school proposal was “a matter related to the prime minister.” Yanase said he has “no recollection” of meeting with the officials, and Prime Minister Abe said he trusts Yanase. Some 82% of pollees said they are not convinced by this explanation.

Some 76% of pollees said that the Finance Ministry did “not appropriately handle” Administrative Vice Finance Minister Junichi Fukuda’s announcement that he will step down. He is resigning in response to allegations that he repeatedly made sexually suggestive remarks to several female reporters. Moreover, 50% of respondents said that Finance Minister Taro Aso “should resign” over the sale of state-owned land to school operator Moritomo Gakuen and the sexual harassment allegations against Vice Minister Fukuda, while 44% thought that is not necessary.

Meanwhile, 74% said that Prime Minister Abe “bears major responsibility” in the official documents scandals and the Moritomo Gakuen and Kake Educational Institution cases. Pollees were evenly split over whether the Diet should place priority on the series of scandals in its deliberations, at 46% each.

[Polling methodology: The nationwide survey was conducted on April 20–22 on a computer-aided random digit dialing (RDD) basis and targeted voters aged 18 or over with calls placed to landline and mobile phone numbers. Valid responses were received from a total of 1,066 persons, including 540 persons (out of the 873 households with one or more eligible voters) for landline numbers and 526 persons (out of the 1,112 persons who answered) for mobile numbers. The valid response rates were 62% for landline numbers and 47% for mobile numbers. ]