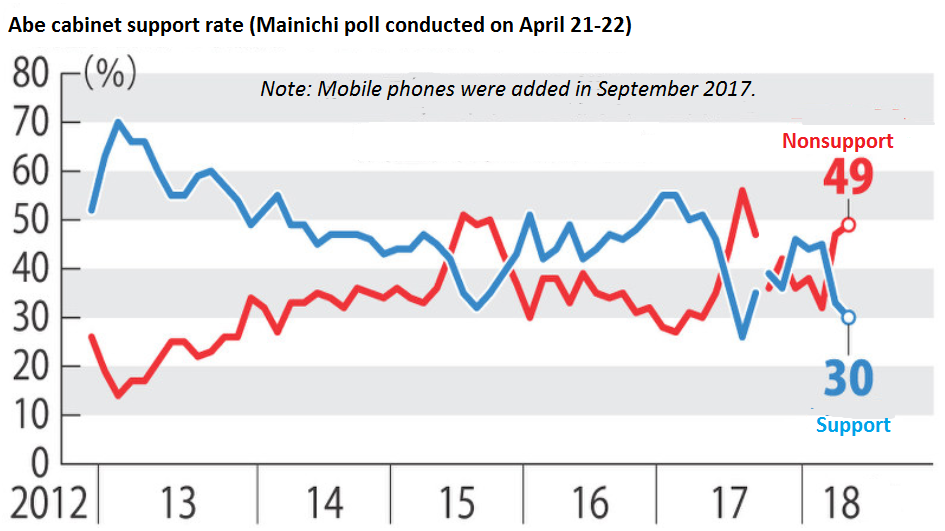 The approval rating for Prime Minister Shinzo Abe’s administration slid further to 30% in the latest Mainichi Shimbun opinion poll conducted on April 21–22, dropping 3 percentage points from the results of the previous survey taken in mid-March. The nonsupport rate was 49%, up 2 points. Nonapproval exceeded approval for the second month in a row, as support continued to slip. A majority (51%) of pollees said that Deputy Prime Minister and Finance Minister Taro Aso “should resign” over the series of scandals involving the Finance Ministry, including the sexual harassment allegations against Administrative Vice Finance Minister Junichi Fukuda and the falsification of documents related to the sale of state-owned land to school operator Moritomo Gakuen.

Looking at the cabinet support rate by political party supported, 66% of Liberal Democratic Party (LDP) supporters said they backed the cabinet, down 8 points from the previous survey. Meanwhile, Komeito supporters were evenly split. This shows that there continues to be a declining trend among ruling party supporters, as well. Some 51% of independents said that they do not support the cabinet.

Regarding the Kake Educational Institution’s proposal to establish a new veterinary school, a document has been found that states that Abe’s executive secretary at that time (2015) said at a meeting with Ehime Prefectural officials and others that the Kake veterinary school proposal was “a matter related to the prime minister.” Kake is headed by a friend of Prime Minister Shinzo Abe. The executive secretary has denied making the statement. Some 74% replied that the denial was unconvincing, while those who accepted the explanation stood at 12%.

Daily logs from the dispatch of Ground Self-Defense Force units to Iraq were found although Defense Ministry officials had made statements in the Diet last year that such documents “do not exist.” A majority of 54% said they think civilian control of the SDF is not functioning properly, while 26% said that such management is working without a problem.

Some 64% said that Prime Minister Abe “bears responsibility” for the series of scandals involving official documents, including those involving the Finance Ministry, easily exceeding the 22% who thought otherwise.

The political party support rates for the LDP (29%) and the Constitutional Democratic Party of Japan (13%) were both unchanged from the previous poll. The support rates for other political parties were as follows: Japanese Communist Party, 3%; Komeito, 3%; Nippon Ishin (Japan Innovation Party), 2%; Democratic Party, 1%; Party of Hope, 1%. Some 40% said they do not support any particular party.

[Polling methodology: The survey was conducted by pollsters over the two-day period of April 21–22, 2018, targeting landline and mobile telephone numbers across the nation on a computer-aided random digit sampling (RDS) basis. The survey excluded landline numbers in municipalities designated as “difficult-to-return” zones due to the Fukushima Daiichi Nuclear Power Plant accident. Valid responses were received from 574 persons (out of the 873 households with one or more persons age 18 or over) for landline numbers and 568 persons (out of the 734 persons age 18 or over who answered) for mobile numbers. The valid response rates were 66% for landline numbers and 77% for mobile numbers.]