U.S. plans to maintain maximum pressure on DPRK until it denuclearizes 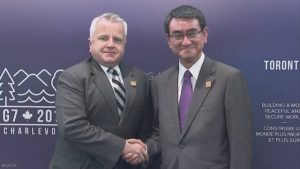 Asahi wrote that at the G7 foreign ministers’ meeting held in Toronto on April 22-23 the Trump administration expressed its intention not to relax sanctions or give other rewards to the DPRK just for pledging to suspend its nuclear and missile tests. The paper wrote that an unnamed senior USG official, who was part of the American delegation to the meeting, reportedly said that the past approach of giving rewards in stages only for the freezing of nuclear development was a mistake and that the United States will continue to apply maximum pressure on the DPRK until it substantially relinquishes its nuclear program. The paper wrote that GOJ welcomes the Trump administration policy and that Foreign Minister Kono and Acting Secretary of State Sullivan confirmed their nations’ unity in dealing with North Korea in their talks in Toronto on Monday, during which they confirmed maintaining maximum pressure on the DPRK until it relinquishes all types of weapons of mass destruction and ballistic missiles. Yomiuri also reported on the meeting between Kono and Sullivan, adding that they confirmed cooperation in resolving the abduction issue and discussed the new economic consultations on trade.