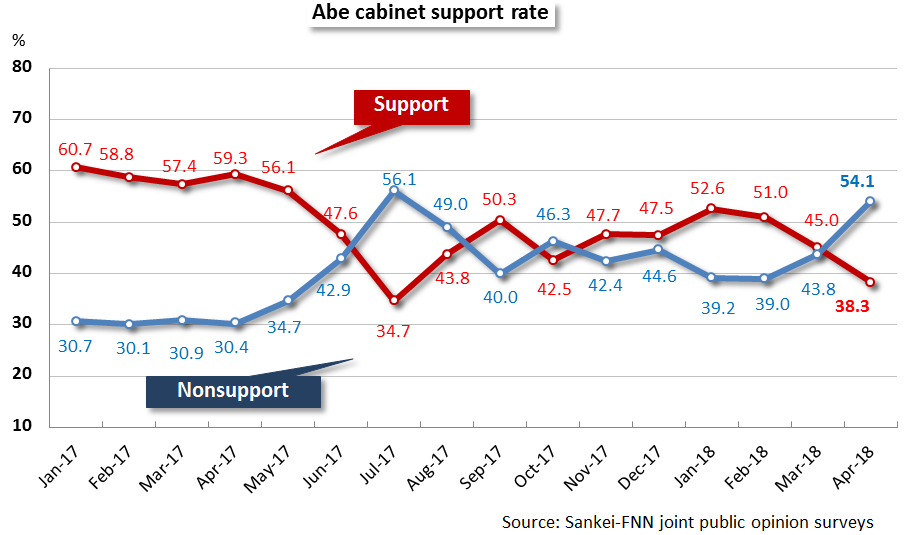 In the opinion poll jointly conducted by the Sankei Shimbun and Fuji News Network (FNN) on April 21–22, the support rate for the Shinzo Abe cabinet continued to fall, plunging to 38.3%, down 6.7 percentage points from the previous poll (conducted on March 10–11). The nonsupport rate was 54.1% (up 10.3 points from the previous survey), thus surpassing the support rate. This is the first time for the nonapproval rate to exceed 50% since the poll taken in July last year after the Liberal Democratic Party (LDP) suffered a crushing defeat in the Tokyo Metropolitan Assembly election.

In relation to Kake Educational Institution’s proposal to set up a new veterinary school, Tadao Yanase, former executive secretary to Abe, said he has “no recollection” of meeting with Ehime Prefectural officials and others. Some 82.4% say that they are “not convinced” by this explanation given by the Abe administration.

Administrative Vice Finance Minister Junichi Fukuda has been dismissed amid allegations of repeatedly making sexually suggestive remarks to female reporters, and the Finance Ministry has asked the reporters to come forward. Some 60.8% of respondents say that this handling of the matter by the Ministry of Finance is “inappropriate.”

At a press conference on April 23, Chief Cabinet Secretary Yoshihide Suga said, “We take it seriously that the public views the administration harshly, and we will thoroughly explain each issue. We will restore confidence by addressing each domestic and international issue and producing results.”

Some 42.4% of respondents said they welcome the outcomes of the recent Japan-U.S. summit, where the two leaders discussed North Korea and bilateral trade issues, while 49.6% said they do not.

A plurality of 81.9% said they support the agreement between President Trump and Prime Minister Abe to continue to put maximum pressure on the DPRK until it completely abolishes its nuclear and missile programs. Meanwhile, 56.7% said they expect that progress will be made on the abduction issue at the U.S.-DPRK summit, while 40.1% said they don’t.

[Polling methodology: The survey was conducted until the calculated number of responses was obtained by placing telephone calls on a random digit dialing (RDD) basis adjusted to the gender and age composition of each survey area. A total of 1,000 men and women, aged 18 and over, across the nation were surveyed. The survey was conducted on April 21–22, 2018.]