U.S., Japan agree to cooperate on infrastructure development in Asia-Pacific 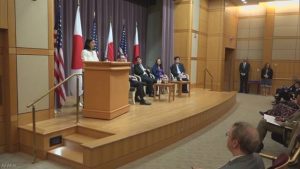 NHK reported online that the State Department and Japan’s MOFA hosted the second “Public-Private Sector Roundtable Discussion on U.S.-Japan Cooperation on Third Country Infrastructure” in Washington on Monday, noting that some 100 U.S. and Japanese government officials and business executives exchanged opinions on how to expand bilateral cooperation to assist Indo-Pacific and other nations in securing quality infrastructure. Assistant Secretary of State Singh reportedly stated at the outset that the two nations are hoping to study how to expand cooperation between the governments and commercial enterprises in order to “compete with nations and companies that do not uphold international rules and norms.” The broadcaster speculated that the U.S. official made the remarks with China in mind, emphasizing that the two governments are anxious to support U.S. and Japanese companies’ infrastructure exports to counter Beijing’s “One Belt, One Road” trade promotion initiative.